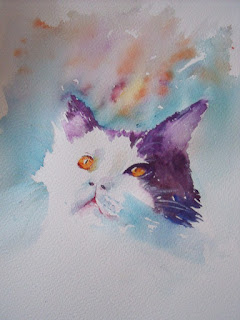 This is another painting from a photo from PMP, posted by Eileen and such a sad story too...... his name was Zacky and he was found dead in the garden at 8 months old having been poisoned!!! I really don't understand how anyone can do somehing like that to an animal!!!

In  real life he was a black and white kitten with eyes the colour you see here so a really striking cat... as often happens I got a bit carried away with the colour but have to admit  do like the effect and even though it may not quite represent Zacky, I think I captured the "essence" of him and Eileen liked it!!!

Am not name dropping here...... well ok maybe a I am a touch then............!!!!!! but I took this to my workshop with Jean Haines and she pointed out that there was too much orange colour over to the top left, I now there isn't much there and it is only subtle, but she just covered that area with her hand and the eyes suddenly popped out.... not something I would ever have considered which is why she is where she is and why I am where I am!!!! What an amazing eye she has, I know I and many others love her work but what goes on behind it is quite remarkable, the depth of her knowledge, then the application is really in the stratosphere compared to us lesser mortals and a thoroughly nice person to go with it!!!
Posted by Judith Farnworth Art at 00:40