I am preparing for my new Brusho workshop on the 20th January so working on some new subjects for the next few days and then who knows what we will do!!

We don't have any snowdrops out yet as naughty puppy keeps digging up bulbs......can't leave him for a minute in the garden before he is rooting and digging so we have no idea just which bulbs they are but our garden which is most definitely a Spring garden is going to be decimated before we even get there!!Grrrrrr!!!

Anyway like many painters I tend to paint in the seasons and always do a few snowdrop studies at this time of year. I enjoy creating the composition from nothing and seeing what I come up with and have a few studies over the years which I have created in the same way.

For this piece I drew 3 flower heads, used some wax to capture some highlights on the petals and leaves, then using Yellow, Turq, Leaf green and purple, sprinkled all over the paper leaving the flower areas blank. I then sprayed all over and some paint then bled into the flower heads but the wax kept some of the highlights and the white of the paper was also preserved in parts. I like the texture Brusho creates and decided to keep that in the bg knowing that my flower and leaves would be smoother so would create contrast in the piece.

I could barely see the pencil lines at this stage so the drawing only worked as a vague clue and allowed me to decide on the composition in the first place, so I then started to work negatively around the flowers, picking out petals and stems, keeping hard and soft edges, letting some edges bleed into the petals,  and as I was working,I saw another flower head appear towards the bottom right. I know 4 is not a good number compositionally but I really felt in this position the composition was actually improved so decided to work with it. Would be interested to hear what you think.....

I am always drawn to contrast of light and dark and I think it works really well with snowdrops and next time I will try in different colours. For workshops I work in the colours the students have which is usually the basic set of 12 but I now have most of the colours so a far bigger selection to choose from.

I continued adding the darks and also worked with some Miltons Fluid (and water) to restore some lights... but the blues will only restore to a pale turquoise whereas the reds and purples bleach out very well. 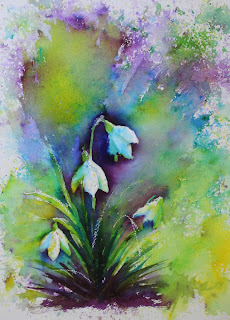 What is so fantastic about Brusho is that it challenges the artists eye. Because you never know just what will happen when working this way, it is always tricky trying to work out where to go with something and how to finish it, but I am very happy with the light on this one and the palette I used which is one of my favourites in Brusho.
Posted by Judith Farnworth Art at 09:10 4 comments: