Figures in the Landscape

Am not sure if this was a wise decision but no backing out now as my All Day Figures in the Landscape workshop takes place in just over a week and a half!!

I have run a half day workshop for a lovely group called Paint Pots in St Helens where we did a lot of preliminary work on figures, proportions and how to place them so that they follow the rules of perspective...often the heads or shoulders will all be at the same height depending on where your eyeline is and it is the feet which move up or down making the figures larger or smaller thereby p;acing them more in the distance or closer.

We will also be doing some gestural drawing which is a really fun exercise..... well at least I enjoy doing it!!

However I then had to come up with a plan for pulling it all together and placing some figures in a landscape!! Easy......nooooo! The problem has been that any image I have found with suitable figures in have had a rather complicated bg's maybe with buildings with lots of issues of perspective or other images have had people sitting at cafes and again would be rather complicated to translate into just an afternoon session so I have done quite a few "practice" pieces thinking I had found a good image only to realise they may be too tricky for workshops. So I do have a few unfinished pieces at the moment which I may at some time come back to. Anyway I have finally stumbled across a beach scene (by Max Hemingway) which looked perfect and also a street scene (by John Melhuish) which I have cropped a bit to eliminate some of the bg. I am swaying towards the beach scene as it shows some of the principles quite nicely and I am worried that the street scene will prove a bit too difficult. If it has taken me a while (I am a fast drawer and painter) it will take the students longer and we may not have time to complete.

I have found from running workshops all over the place that there is a vast variation in the speed at which people work especially when drawing and in the main we have to go at the slowest pace so that everyone has a chance of completing. I remember going to workshops myself and could often do 2 paintings in the time and I often work with more than one piece on the go at any one time (I have been working on 3 this afternoon!!). so I know am not the barometer on which to gauge how quickly we may do something!!

Here is the first painting. I have tried to show the principle of using a "halo" around the figures which has worked well as the light is coming from the large window ahead and is casting shadows behind the figures allowing me to silhouette them and so not be caught up in too much detail. Looking at this I can see there is a perspective issue mid left with the tops of the canopies... they should be at a more acute angle which I will probably alter on the painting before the workshop.So there you have one of the problems.....if I'm not getting right I can hardly expect the students to!! 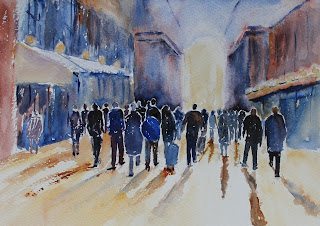 This is the second image which I think is probably more suitable as the bg isn't as difficult but what I will probably do is take a selection of images for people to choose from and though most will choose the one I am demonstrating for those who work a bit quicker or who want a bigger challenge there will be a choice. 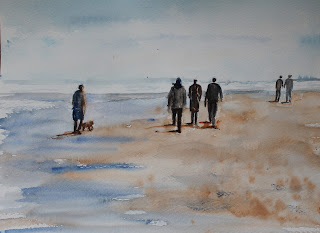 As you can see from this one there aren't as many figures though we can add as many as we want and as well as using the image for reference they will be able to work from the quick sketches they have done earlier in the day. Part of the earlier session will include painting a selection of figures of different sizes and in different modes of walking and at different distances away all of which can be incorporated into their final piece.

So wise decision or not, I will be there on Wednesday the 7th June ready and waiting for everyone to arrive and have another fun filled (and I hope informative) day!!
Posted by Judith Farnworth Art at 11:55 2 comments: