By the Moonlight and Caspar 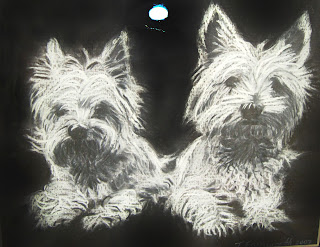 Thought I would add a few of the portraits I do to commission, animals, babies, parents, grandparents (dead or alive!!!) etc. This was done for someone who obviously has two Westies, she saw the one of Caspar I did ( see next post) and she said she had never seen anyone quite capture the faces like I had before... was really pleased with that comment!!!
This was done before I had much experience taking photos in fact had forgotten to do this until it was framed hence the glaring light!! Chalk and charcoal, done negatively as I don't think I had any black pastel paper at the time so was a bit tricky!!


This is Caspar, done for my son's girlfriend, for her 21st, he had been put to sleep and her Mum thought she might like a lasting memory of him. Check out the camera light again!!! This was done on grey pastel paper with chalk and charcoal 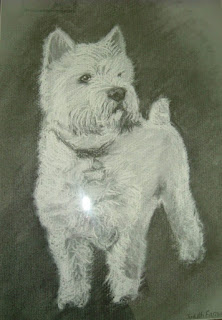 Posted by Judith Farnworth Art at 23:54