To Crop or Not to Crop?

I have been wanting to do two things recently... first have a change in the size of paper I normally use (usually 1/2 or 1/4 imperial) and secondly paint a waterfall.

Whilst in Malaysia we visited an Art shop where I bought 5 full sheets of Saunders and a pad f Daler Rowney CP Aquarelle. This isn't paper I would normally use but it was the size which attracted me, 8x16 and I thought I could do some different compositions with it.

I'd had every intention of taking it to Anglesey with me and guess what, I forgot it!! Almost ruined my holiday I was so mad!! Anyway for those of you who read my Anglesey Blog you will know that I heard there was a waterfall at the Hidden Gardens, Plas Cadnant, which we visited on out last day and you will find one of the reference photos on the blog.

I cropped the image to make it portrait orientation and to place the focal point in the top third and set to work this afternoon on it. I know waterfalls aren't easy but if you simply leave most of them white with a few darks streaks in them you are almost there... all you have to do is the rest then.

The difficulty with this was drawing the eye to the top of the waterfall while keeping the foreground loose to the point where I now wonder if the foreground is a bit superfluous? I didn't want to add too much detail there though one idea would be to create more of a flow from the foreground up through the reflections so the the eye is guided right from the bottom of the painting...anyway let me know what you think... 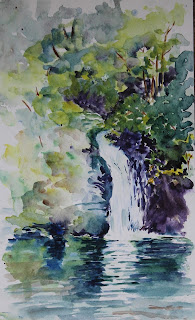 I do get some interesting commissions and this was one of them. I was invited to paint at the Flower Festival at one of our local churches in fact the one where I hold my art group sessions... I suspect that's why they asked me (am such a sleuth!!) so although I knew I had a few busty weeks leading up to the event I was curious to see what I could come up with... no pressure then!!

I had intended to visit the church prior to the festival as I had an idea that I might paint a vignette of one of the windows incorporating some of the florals in the foreground but time ran away with me and before I knew it the festival was upon me and I had agreed to visit yesterday  and do my painting!! Yikes!!! 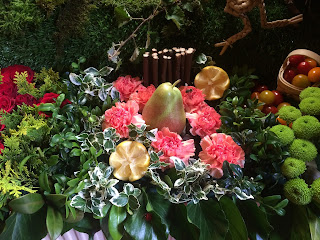 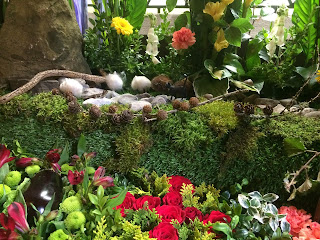 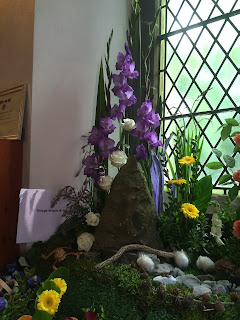 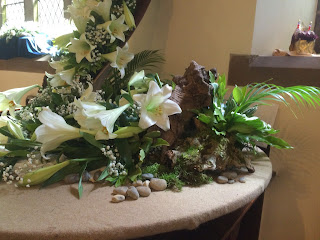 I liked this because of the rustic, natural feel and it also wasn't too complicated for me to complete in the afternoon. So many decisions and considerations for for my little brain!

I started with the log and worked my way across the composition which was another bonus as that was already really good and I didn't need to play around with it. I can see now this photo isn't quite the angle I painted at as I was able to sit in one of the pews so was more in front of the arrangement rather than to the side, so here is my finished painting 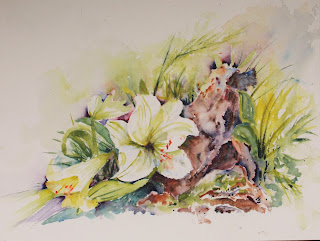 I brought it home to tweek it a bit. Unfortunately the light was very poor in the church and only when the sun came out (which only happened a couple of times) could I see it properly so rather than leave it with them I wanted to see what it looked like in good light and have made a few minor alterations and now I am rather happy with... another phew!!

I have recently had a special birthday and some of you may know my hubby took me and my family for a weekend away to Paris. He knew that all I wanted to do was spend some time with my sons and partners as we rarely get time together as a family.  The venue was meant to be a surprise but I did know he would do his best to get us all together and he surpassed himself so the fact that he let the location slip on more than one occasion I forgive him!!

We set off last Friday afternoon with little puppy happily ensconced at his dog trainer and caught the train to Manchester Airport. Really quick flight just one hour and five minutes then a taxi to our hotel which was in the St Georges region, North of the city and not far from the Sacre Coeur. My son in Switzerland caught the train and arrived about 8.30 and we then went to have dinner in a lovely restaurant where we had a sort of French type Tapas where each course was a surprise. My other son had to catch a later flight due to work commitments but they joined us about 11.00pm where he finished off the left overs!!

Saturday morning was an early start and we headed up to Mont Matre and Sacre Coeur. Now I don't know how many of you have actually been there and braved the steps but as we approached them I simply prayed the two girls would see sense and head for the lift and I could then swiftly follow but noooo they just marched up to the steps and almost galloped up!! I could hardly then be the only one to take the lift so I gritted my teeth and hoped for the best! The men in my life are all quite fit and chatted happily and without effort as I gasped for breath and at times dear life and eventually had to hold on to the rail. As we approached what I thought was the top I thought it hadn't been too bad only to realise we were only half way up!! 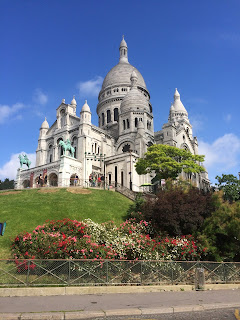 Am really hoping I have some paintable images from the photos I took. The whole city is an artist's dream with so many magnificent buildings....I am hoping to be spoiled for choice when I finally get round to looking at them all properly.

We then walked down towards the Seine passing the Moulin Rouge on the way. My daughter in laws' parents had bought us bus tour tickets for my birthday so we picked it up at the opera house, another wonderful building.

The weather was really pleasant especially in the morning and we were able to sit upstairs and take in the views of the city. Though we have visited quite a few European cities I have no idea why we have never been to Paris... I had been twice as a young girl but don't remember much and am not sure why we have never made it before as I absolutely loved it almost as soon as I set foot there. We passed the Louvre, Notre Dame, the Grand Palace and then a trip up the Champs Elysee to the Arc de Triumphe. We decided to stop North of the Eiffel Tower and found a lovely restaurant where we had French Onion Soup which was delicious washed down with the obligatory glass of wine and coffee. 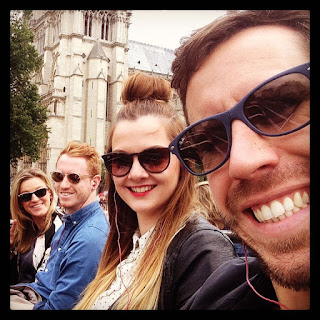 We then walked down to the Eiffel Tower where we stumbled upon the "Fan Zone" for Euro 2016... well I think stumbled is stretching the truth a little. I think I would describe it as guided there particularly by my older son who seemed very interested in walking all the way round all the cordoned off areas to the point where we could actually gain access to this area. He sheepishly said no it didn't matter, he didn't want to go in,  after all it was my birthday and we had to do what I wanted, but as we were so close it didn't seem fair to deny him the experience so we all went in and as he said, the last person he thought he would experience Euro 2016 was his Mum and the last thing I expected to do on my birthday was watch a football match in the Fan Zone!! 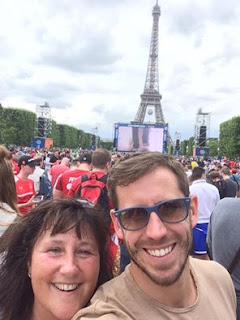 The rains came while we were there so we headed back to the hotel to get ready for their Birthday Treat which turned out to be an amazing restaurant not too far from where we were staying. It was a secret and I was given all sorts of red herrings but we arrived for dinner at 8.00 at Restaurant Kei a lovely French/ Japanese Infusion restaurant. The food was really special and we and my younger son though it was the best food we had ever eaten. My older son and wife have been to a restaurant in Cartmel called L'Enclume which they felt was as good if not marginally better but it was a wonderful experience and a real treat for us all. 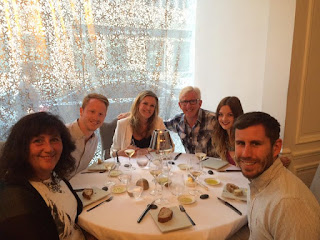 The following day we walked both to the Louvre and Notre Dame. Though I would obviously have enjoyed visiting the Louvre, we didn't have enough time to do it justice and I'm not sure my family would have relished the thought of spending several hours there checking out the paintings. I also wanted to spend my time with them so I'm sure we will take another trip in the future and perhaps spend a bit more time visiting the sights. We stopped for coffees and beers on the way round and sat in the lovely sunshine watching the Parisien world pass by 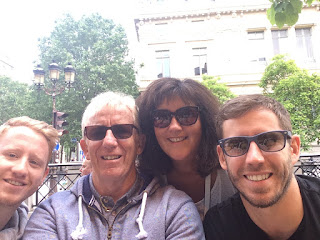 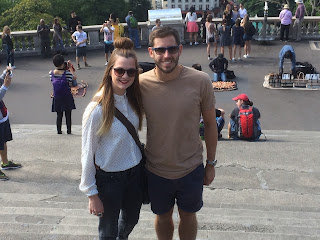 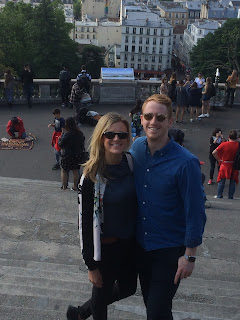 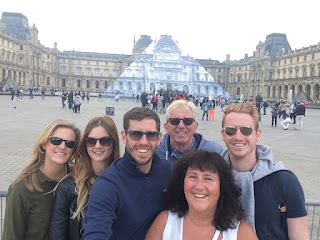 All too soon we had to make our way to the airport for our flight back to the Uk which actually arrived early!! I had the most wonderful time with my lovely family and can't thank them all enough for making this birthday such a special and memorable one!!


Posted by Judith Farnworth Art at 00:25 No comments: