A couple of weeks ago I got a phone call from Dave Hendry (he of Westhoughton Art Group fame) asking would I like to open their annual exhibition? What an honour that was... he had asked the group what they thought about the suggestion of me doing it and they apparently agreed!!! Both my sons greeted the news with superior amusement and also as if I had grown two heads as if to say "aw bless her she does try!!!"

Anyway I didn't really have to think about it, apart from enjoying being with them all as they are a very warm and friendly crowd... I have a lot to thank Dave for in these early stages of my arty life!! I did my first workshop at the group and seem to have been a fixture ever since and also know he has passed my name to other groups recommending they book me to run sessions for them as well.

So I did write a little speech at home, I haven't ever given a speech before but I thought it would be similar to speaking at the demos and workshops I do, which it was and as I do at those I decided to speak naturally without referring to any notes ..... I did take my specs off as I didn't want to see any grimacing expressions so as far as I'm concerned it went really well and they were all smiling happy faces!!!

I had decided that I would mention the quality of the art work and offer some words of encouragement whatever the standard.  I don't always see the finished pieces when I go to the group and of course don't know what they do in other media of which there are a lot so didn't really know what to expect. Anyway I was able to say in absolute honesty that the work was of a really high standard and I was quite blown away by it... there were some truly lovely pieces and I was very impressed by the variety of media they use as I only get to see the watercolour they do.

I have to say a big thank you to everyone for the lovely flowers Dave presented me with.. I was very taken aback as I certainly wasn't expecting anything and it was my pleasure to be at their lovely event!! 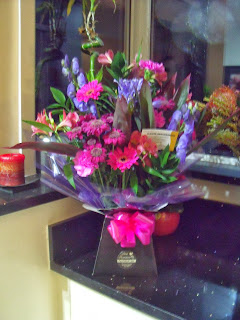 On a final note I understand what it takes to put together in exhibition of this sort and every credit should go to Dave Hendry who works very hard behind the scenes for WAG.... the group has had a waiting list recently... Dave's solution, he has started another session!! So they now hold 2 meetings every Monday, am and pm in the same venue and it looks like both sessions will be equally well attended... already looking good for next year's exhibition!!
Posted by Judith Farnworth Art at 14:58