I have once again signed up to the Leslie Seata painting a day for January and hope to complete this time!! I am also hoping to do an odd step by step during this time and for the rest, post as a sort of tutorial. My blog  (just spotted I had written bog... too much information!!) has been quiet for the last couple of months as I have been so busy with xmas, puppy sitting, the exhibition, xmas cards but I am going to try and rectify that for the New Year.

This is the first of my paintings, fairly small, only 7x11 (1/8th imperial) painted from a image by Aiswarya V from Paint my Photo... something about this image inspired me and I have had it waiting for me to paint for quite a while. The lady is looking out of the window of a train completely preoccupied and rather melancholy and it was the mood which I wanted to try and capture so decided not to include the train window. Not an easy image and I'm not sure if I have done it justice but I wanted to create lost and soft edges and found edges and I think that part has been successful. As often happens these days, the palette decided itself (Indigo, Green Gold and Burnt Sienna) though this is where I am not so sure how successful it has been. This is only a study and I may well try it again with a different palette. I have been inspired by the work of Liu Yi and intend to study some of his techniques to try and incorporate into my work. I haven't seen any videos but suspect he works wet in wet.

I did a quick sketch, then I worked as I usually do to start with, adding the paint then diluting on the paper then adding more paint/ water as I went along leaving me with a wash both around and as part of the figure. I only really left the face and arms properly defined at this stage having let the paint flow from the headgear into the bg and around the legs and body and wanting to keep a loose watercolour feel to it. Then it was a case of building up the layers, letting it dry, standing back to see what else was needed (I also sometimes photograph them before they are completed as this often makes it a lot clearer as to what might be needed) and continuing until I felt it was finished. Obviously I don't want to overwork but I find that the tiny tweaks I might make won't really cause overworking as it might only be a case of slightly lifting off here and there or slightly increasing the tonal value but at this stage the changes are minor.

Here is the final piece taken with my new camera which is firmly becoming attached to my side!! 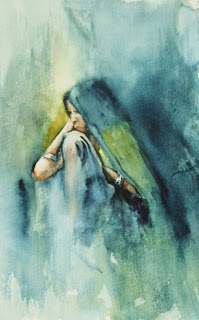 Posted by Judith Farnworth Art at 08:34