And before any of you ask, no this is not a self portrait!!!! Her figure is marginally better than mine!!!! I thought this image, which I found on images of tennis players, killed two birds with one stone.... topical as we have been playing tennis and an obvious choice to continue with my very serious nude series!!!! I am obviously far too light of foot and active on the court for anyone to have been able to take such an action image of me like this .........I am however wondering just what I'm meant to be fiddling with under my dress..........maybe best not to dwell on that!!! By the way, I do like the intense action and movement around the racket on this, and I don't know if it is clear on here but the droplets of sweat breaking from the forehead....... 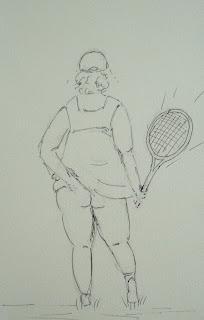 Just before we went to Lake Garda a friend of mine text me asking would I like to go to a "Rusty Rackets" session at our local tennis club. As this was my first Monday off work I jumped at the chance though haven't played tennis for about 15 years. Anyway today was the third time I've been and have also persuaded my husband to come as well, so this morning having taken our ibuprofen and paracetamol, mine for my knees and back and him for his moderate to severely arthritic hips we sent off in the glorious sunshine for our tennis session!!!

Gary, the coach said last week he could see we had both played before but as I prepared to listen to his compliments about our skill and talent and how we had obviously not lost it.... he followed up by saying yes he could tell it was a long time ago as our rackets were so antiquated!!!! He said today he thought ours would be an interesting household as he observed my husband and I (I know I sound just like the Queen!!!) be ceremoniously whooped by the opposition one of whom has either had or needs 2 new knees!!! But it's the taking part that counts... right????

Anyway we thoroughly enjoyed again, and look forward to more sessions in the next few weeks, we may even treat ourselves to new rackets as that is obviously affecting our performance!!!

So my retirement is taking many new paths, strangely enough another participant was a lady who is running the art exhibition I am attending in a couple of weeks at the same venue, she called me later and asked would I mind her mentioning my name to the Bolton press to help advertise the event..... mind???? No I don't mind at all though am not sure why she thinks it may help as I am absolutely certain no-one will have a clue who I am!!! But baby steps and who knows what will happen!!
Posted by Judith Farnworth Art at 11:08