I booked this with my arty friend Gill Fox over 12 months ago and had been eagerly awaiting the event, 2 days of painting with a master.. bliss!!

We set off bright and early as there was no way we were missing a single minute of this!!

The venue was Sandpipers Studio on the Wirral, a lovely venue, looks like a purpose built studio set on a farm and absolutely perfect. Julie who hosts courses throughout the year was very warm and welcoming and I have to say the lunch she provided was fabulous!!

Fabio was charming and friendly and his wife Flavia a lawyer in Brazil was his assistant religiously supplying him with clean water at every opportunity. We started at 10.00am with a full floral painting demonstrated by Fabio where we were asked not to take photos or ask any questions as there would be time for him to answer any queries etc after, when he would demonstrate a smaller study and talk us through. His English isn't brilliant but certainly good enough to get his message across enough for us all to fully understand what he was talking about.

It really was mesmerising to see him work on a painting, he moves around the piece very quickly completing a half imperial size in about an hour... his colour choices seem haphazard (I know they aren't) but he seems to flit from one colour to another and that is where in all honesty I have to say I would like to have heard more about his thought processes.....he paints very quickly and I understand he may not necessarily be able to verbalise his thoughts as he is so fast and moves around the piece so rapidly but as a student I would have found that helpful. Possibly the language is a problem but I doubt he talks through his paintings even in his mother tongue.

After the first painting of a still life he had set up with roses, daisies etc, he then did a smaller piece of a single rose and talked us through more of what he was doing and was very willing to answer any questions we had both from the first piece and as he was painting the second. There we gained a little more insight as to his methods. We then chose flowers of our own to have a go at and before lunch Fabio did a critique in front of the class of each person's painting with ideas of possibly what we had done wrong and where to go next. He keeps the white of the paper and is constantly lifting paint from the paper. 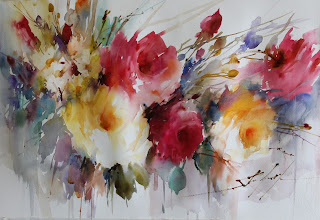 So this was our first example and don't ask me why but I don't have a photo of the second study of a rose... anyway here are my efforts 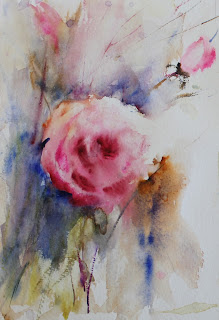 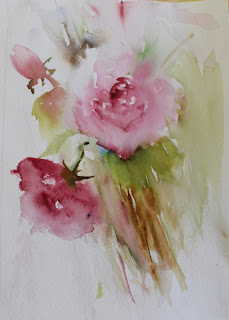 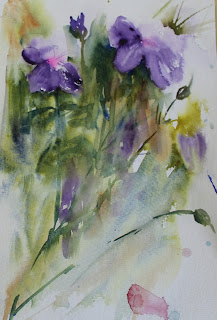 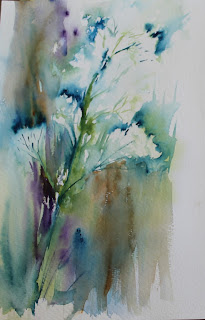 He uses a lot of straight strokes with his flat brush (and his rigger) but places them very carefully to support the composition and am not sure I grasped that. Kept doing too many and not washing enough away. I also didn't save enough white of the paper on all these, the roses I think are better then the other two.

This was his second painting in the afternoon where he demonstrated a full wet in wet technique lifting all the whites. He works all around the painting creating detail, then more detail then stands back adds a bit more then suddenly signs the piece....I kept trying to guess the moment when he would as I had no idea when he had finished!! 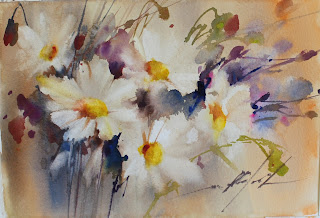 This was my piece in the afternoon which I think I was most pleased with... 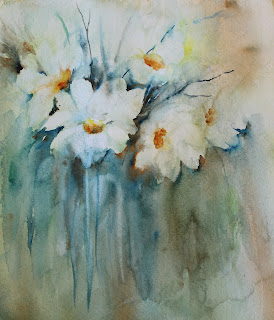 At the end of the first day he chose a few paintings to work on.. I have never seen this done before. He used the students palette and started scrubbing away removing colour, restoring whites, adding darks, adding his characteristic lines, softening edges and altering the compositions adding more flowers, buds stems where he felt necessary to improve things... again he didn't say much while he was doing this but he certainly improved every one!! 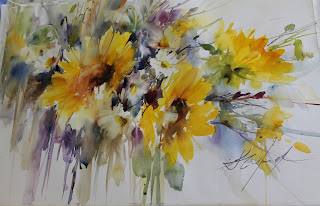 This ended up quite a complicated composition and took a little while longer than the first demo of the day before. Once again he had a still life set up in front of him but it is clear he understands flowers and their forms so well and "knows" just how to paint them, to create the best effect. So he uses the display only as a clue to create his overall composition and for the odd reference. He does a basic sketch and vaguely sticks to it but even though every painting of his will be unique, it is clear that he has a lot of basic shapes he calls on for his compositions and as the piece progresses he knows where to extend or draw the composition in. As I have mentioned in my blogs time and time again, the more skilled the artist the better able they are to add those all so important finishing touches, and he is no exception which is why it was fascinating to watch him work on the students' paintings.

As I had only done studies the previous day I decided to do a full painting so I selected some flowers from the large selection we had at the studio and set off!! 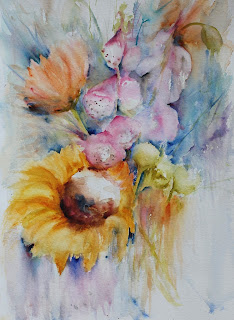 I wanted to do a different composition to the landscape orientation he had used as I always try and challenge myself to put into practice what the tutor is doing without following to the letter.

In the afternoon, Fabio showed us how he might work from a photo and this was both my least favorite demonstration and least favorite of my own efforts. Unfortunately I didn't take a photo of his piece which yet again was superb and mine bore little or no resemblance.  My first washes went really well and I was loving what I was seeing then I lost the plot as I tried to build the composition up. This was the piece Fabio worked on for me and though it looked better it didn't really rescue it!! I think what I learned from this is that I am not good yet at painting flowers with lots of small detail, am not sure what these flowers were but lots of little flower heads on their stems and then it is difficult to paint without losing your place and of course knowing how much to add and where to add. 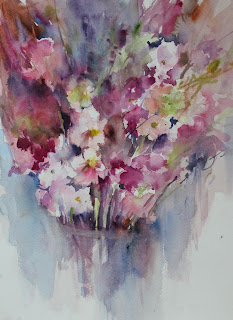 I had too many hard edges and he washed quite a lot of it away, redefining the flower heads and adding depth to the composition but as you can see it is a bit muddy top left where he has tried to wash away and as I had used Arches for this piece the lifting wasn't too easy. He works so quickly and I really would have  loved to know what his thought process was and why he was doing what he was doing.


Not that I am trying to compare myself in any way with him ( my painting simply isn't in his league..... yet lol) but talking as I was painting was a skill I worked really hard to develop. I had always been very silent when I painted and recognised that I would need to speak a little as I was teaching so I spent hours practicing speaking out loud and trying to explain what I was doing and why. I am always concerned that people get an understanding of how watercolour works and admit that I may not produce my best work at a workshop or demonstration because I am distracted from the actual painting but I would like to think people go home with a much better understanding of firstly how I work and secondly how watercolour works.

There may come a point when it is more important for me to produce a good painting rather than describe the process (sincerely hope not) if as an artist I have a reputation to maintain, and producing an under par painting would be damaging, but I like to think that wouldn't be as important to me as making sure everyone got as much out of my workshops as possible and Fabio constantly reassured us that he would answer any questions at all once he had finished painting which he did. The problem with leaving it until he finished, was that questions I might have asked as he was going along were of the moment and no longer relevant and difficult to refer back to once he had finished the piece. A workshop like this wouldn't be for beginners in fact is probably for more advanced painters so obviously the basics don't need going over but the subtleties of how he uses colour throughout the painting, how he builds up the composition and how he adds the finishing touches would have been absolutely amazing to hear.

Having said all that I would attend another of his sessions and hope he might do a building or landscape.....it was a lovely experience as I always enjoy seeing artists paint especially ones as skilled as him!!
Posted by Judith Farnworth Art at 01:11