Our First Visit to Basel

As some of you may know, my son and family move to Switzerland in April for a new job and we had a wonderful time visiting them in the middle of June.

Their new home is superb and they are settling well into their new lives helped considerably by the fabulous weather. For some reason I hadn't realised Switzerland was as far South as it is so neither had I realised the weather would be so fantastic.

We arrived late Thursday evening having had a delay with our flight and were greeted by our son, his partner and little puppy who recognised us both immediately and was so excited on the journey home much to the consternation of a rather grumpy taxi driver!

We had a tour of their new home, a wonderful house with parts of it dating back to the 14th century but very sympathetically modernised and perfect for all their needs. Set in the small town of Riehen it is a short tram ride from the centre of Basel where my son now works but very rural, surrounded by such pretty countryside and very close to the German border.

We woke early on Friday morning and after my son had disappeared to work we took a lovely walk in brilliant sunshine and already very warm. 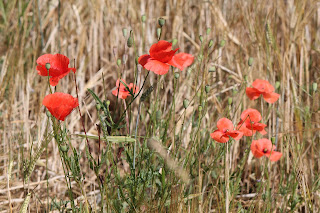 Beautiful wild poppies in the fields by their home 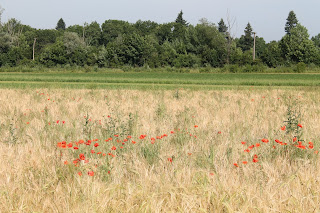 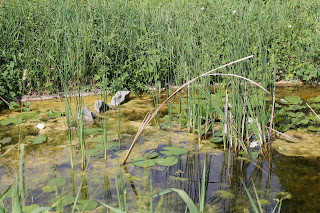 Wild life ponds full of lilies and frogs... hoping there may be some material here to paint!!

The Swiss way of life is very different from here and what is really noticeable is how incredibly clean everywhere is... people respect their environment and their neighbours, there is no litter, few places are open on Sundays and people can be fined for making noise either late in the evening or on Sundays. It is considered a privilege to live there and of course the tax system holds a lot of appeal!!

We went into Basel on Friday evening and had a delicious Indian meal with pre dinner drinks at the Trois Rois hotel, a lovely place on the river. The following day we had tour of the city, saw where my son works and made our way back to their home for beer o'clock and Gin and Tonic in the sunshine after which they made us a delicious meal of Beef Wellington. Both my son and his partner Steph are fabulous cooks so a treat to share their food!! 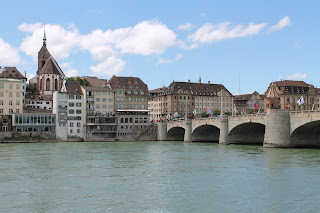 The Rhein flows through Switzerland from Germany then into France. 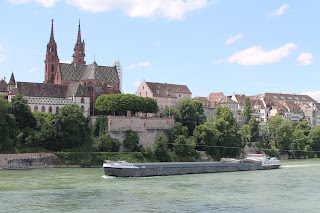 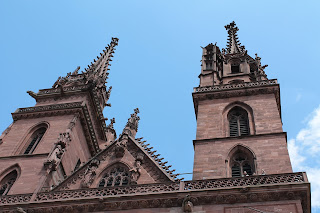 Basel Munster in the centre of the city. We hadn't realised when we booked this visit that it may have been better to go a week later as the city has a huge art event, "Art Basel" which apparently is one of the biggest art events in the world and anyone who is anyone in the art world is there together with many celebs!!


We walked by the river on Sunday morning and then visited the city once more to attend an expat event which they thought may be useful. They have only been there about 3 months so they want to network as much as they can. 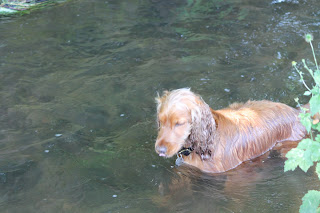 Archie enjoying a dip in the stream... one wet puppy!!

Basel is a very interesting city partly because of it's location, as it sits on the border of France (there is a French exit from the airport) and Germany and the language they speak is Swiss German which though based on German is splattered with French and even Italian (which Switzerland borders to the South) so although they are learning German, and the locals will be able to understand them, they can't understand much Swiss German!! The language of Business is English so they are both ok at work but will need to gain more language skills if they are to interact with the locals.

Switzerland is very expensive so the citizens tend to shop in Germany, where everything is so much cheaper but where they are bound by import regulations as Switzerland isn't in the EU. They have Aldi and Lidl supermarkets together with their own hypermarkets but can only bring in for example a kilo of meat each per visit and the border control sit in their town stopping passing motorists to check their shopping for excess duty. A lot of people don't have cars as the public transport system is so superior and convenient so apart from the shopping being heavy at times at the moment they don't need their own transport.

We returned to the Uk on Monday afternoon both sad and delighted at the same time.. sad that it will be a  little while before we see them but delighted to see them happy and settled...
Posted by Judith Farnworth Art at 13:38