How Much Excitement Can a Gal Stand!!!

Have just been to the second of a 3 day workshop on Brusho led by Joanne Boon Thomas. You may remember I attended the first ever workshop she did on Brusho at the beginning of the Summer, check out my previous blog here. So you would be right in calculating that this was my third ever attempt with Brusho, as I haven't actually done much practice at home with it ( more of why not later!!). This is what I did today.... 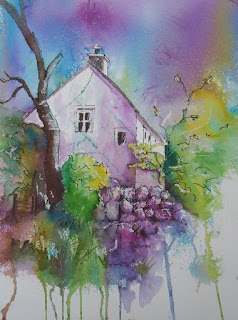 We did a quick warm up on a smaller sheet and then did the drawing with black marker pen from an image Joanne had sketched on location in Kettlewell, a lovely place in the Yorkshire Dales.

We then chose our colours and, as I just love this combination, I decided on purple, turquoise and yellow. I had a feeling this was going to be "the one" as I have been learning and carefully watching how Joanne does it...... so yes while there may be areas I would do slightly differently (not much though) overall I am really delighted with this.... Brusho is even more unpredictable than watercolour but the mixing of colours you can get on the page is just fantastic and as Joanne says it gets very addictive!!! You can get washes, drips, splashes, texture, the list is endless.....

What I really want to share in this blog is the fact that it has only taken me three sessions to produce something like this (and the first one was so long ago I didn't really remember too much of the way to apply it, so I'm only counting it as two sessions!!!) and it wasn't just me who produced a piece like this, the whole workshop did so well with it and every one was so incredibly different. Just like watercolour you need to get a "feel" for it, but as it behaves differently to watercolour different ways of handling it are used, though in other respects it can be used just like watercolour.

I don't know about you but I am really thrilled and impressed with this piece and really after only 2 sessions, I think is a credit to Joanne and her teaching of this product that has really made the progress possible.

Joanne has been booked to take a Brusho painting holiday at the lovely location of Bandouille, an idyllic painting location in France which I did a Blog about in April. Just think how much progress you would make in the week if this is what can be done in two, three hour sessions!!! I know the holiday will include some watercolour but it will be concentrating more on Brusho.... sheer bliss, don't miss out by thinking too long and hard about whether or not you will go!!!

As for me, I am really going to spend some more time developing my Brusho techniques now.... I have intended to go outside on many occasions and have a go but as many of you will know, our "Summer" has been non existent here in the North West so I need to devise a way of painting inside and not get everywhere covered in it.  I am a messy painter at the best of times and I get so excited with Brusho I get myself into even bigger messes, not good when I tend to paint in our conservatory, mainly because my art room has been such a mess..... but it's tidy now and I might set it up as my Brusho workshop.... I believe Tesco sell a plastic coated paper sheet for about £2 which I am going to get to cover everything then I can splash and play to my heart's content!!!

Can you tell I'm a teeny little bit excited?!?!


Posted by Judith Farnworth Art at 07:20