How to use Artistic Licence from a reference photo

When I first started painting, not having any idea at all, I would try and slavishly copy an image with little or no regard to whether the composition was ok, the colours were right and translated well, in fact with no idea at all!!

I didn't have either the courage or the know how to change anything and I think I had this belief in the back of my mind that I couldn't possibly do better than the image in front of me, especially if I was copying another artists work.... how could I improve on what they had done?

Anyway, some years later, lots of practice and disasters later, some more successes later and a lot more confidence, I no longer seek to produce anything like what I see in front of me and tend to use the image more as a clue if that makes sense?

I started to use black and white images so that I could use my own colours and not be influenced, I started to think about changing the "feel" of something so I could think about interpreting for example a sunny day into a Winter scene. I started trying not to include all the detail... especially backgrounds and especially if there are trees (!!!) and opting to just concentrate on my subject rather than trying to include everything and so my painting has evolved to the point I'm at today. 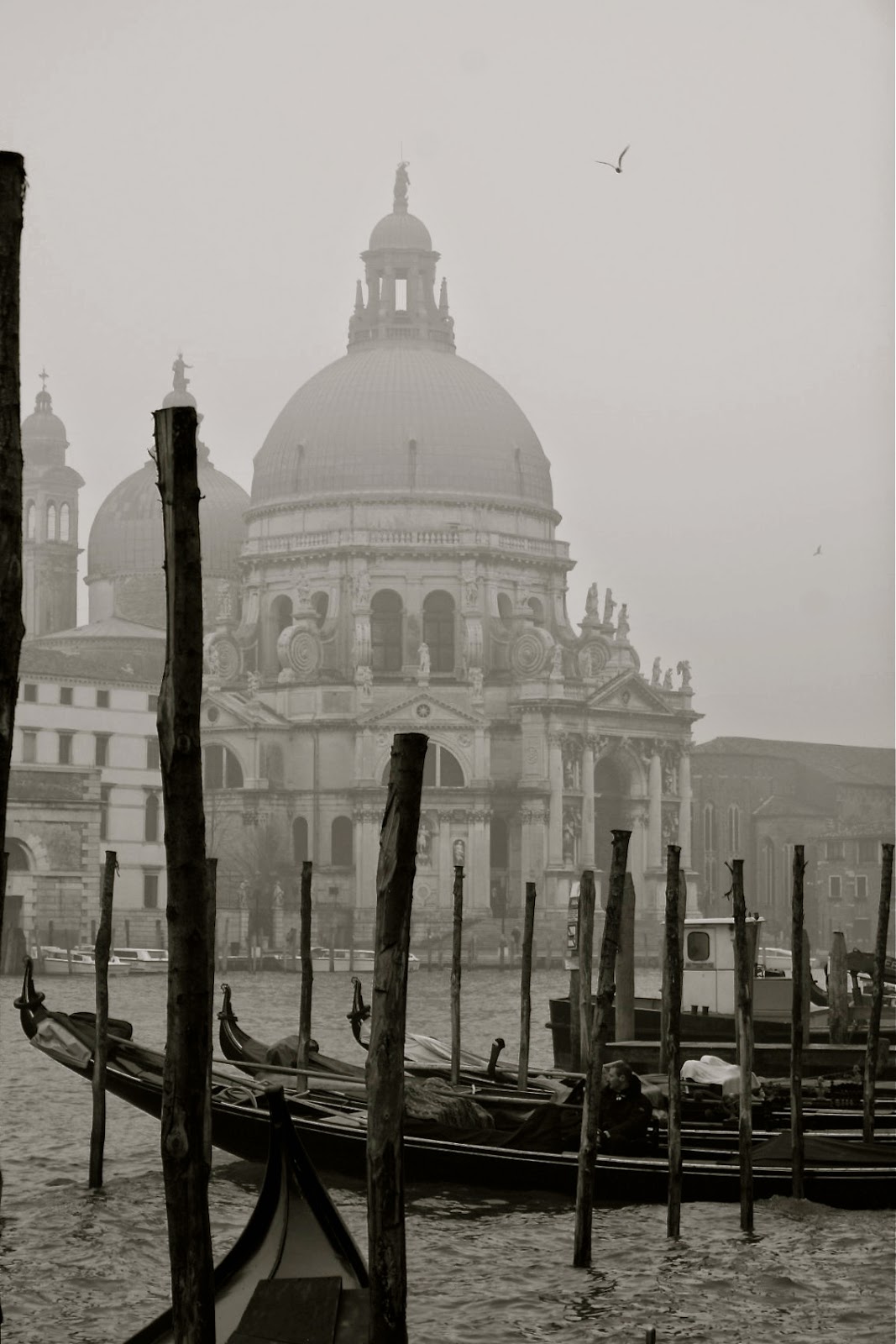 I love this photo and may well do a more representational one of it but I had an idea I wanted to just do a dome, close up with the light falling upon it. I have lots of my own photos from Venice but not one as close as this so I chose to use Ruth's image as my starting point.

All I really wanted was the shape of the dome with the touch of detail below, nothing more and I wanted to do a bright sunny painting, so I decided to lose all the gondola posts, just give a faint ghost of an impression of the dome behind and add, in the larger painting a hint of water, in the foreground. I did a small practice piece which you will see on the poster for the Loosening Up workshops I am running at the Boonric Gallery in the Summer and liked what I was seeing so did a bigger version last week. 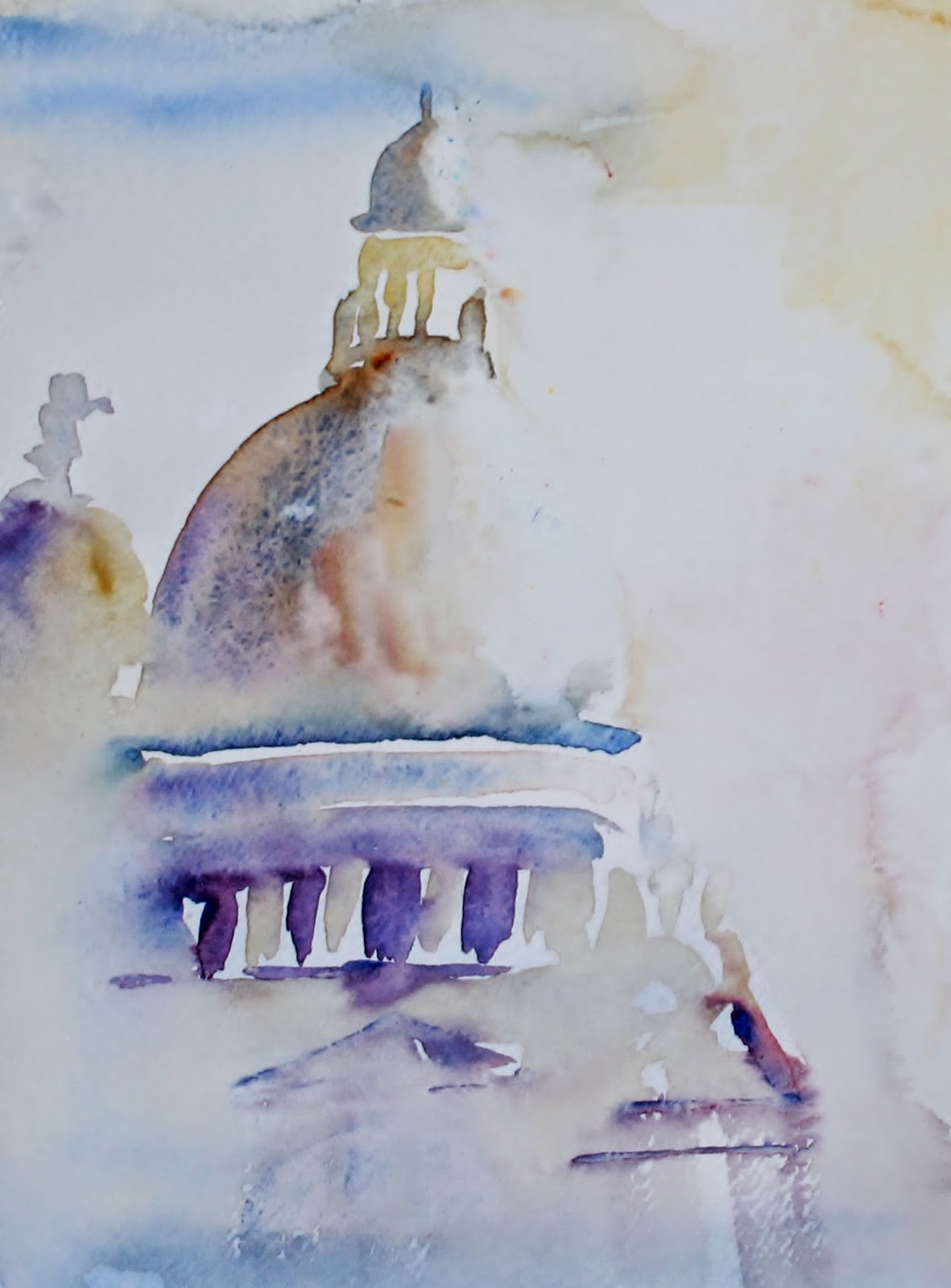 I like the freshness of this one and think I have capture the sunny feel but I also think it is bordering on sloppy and might need a touch of detail adding here and there but this was a very quick sketch just to give me an idea. 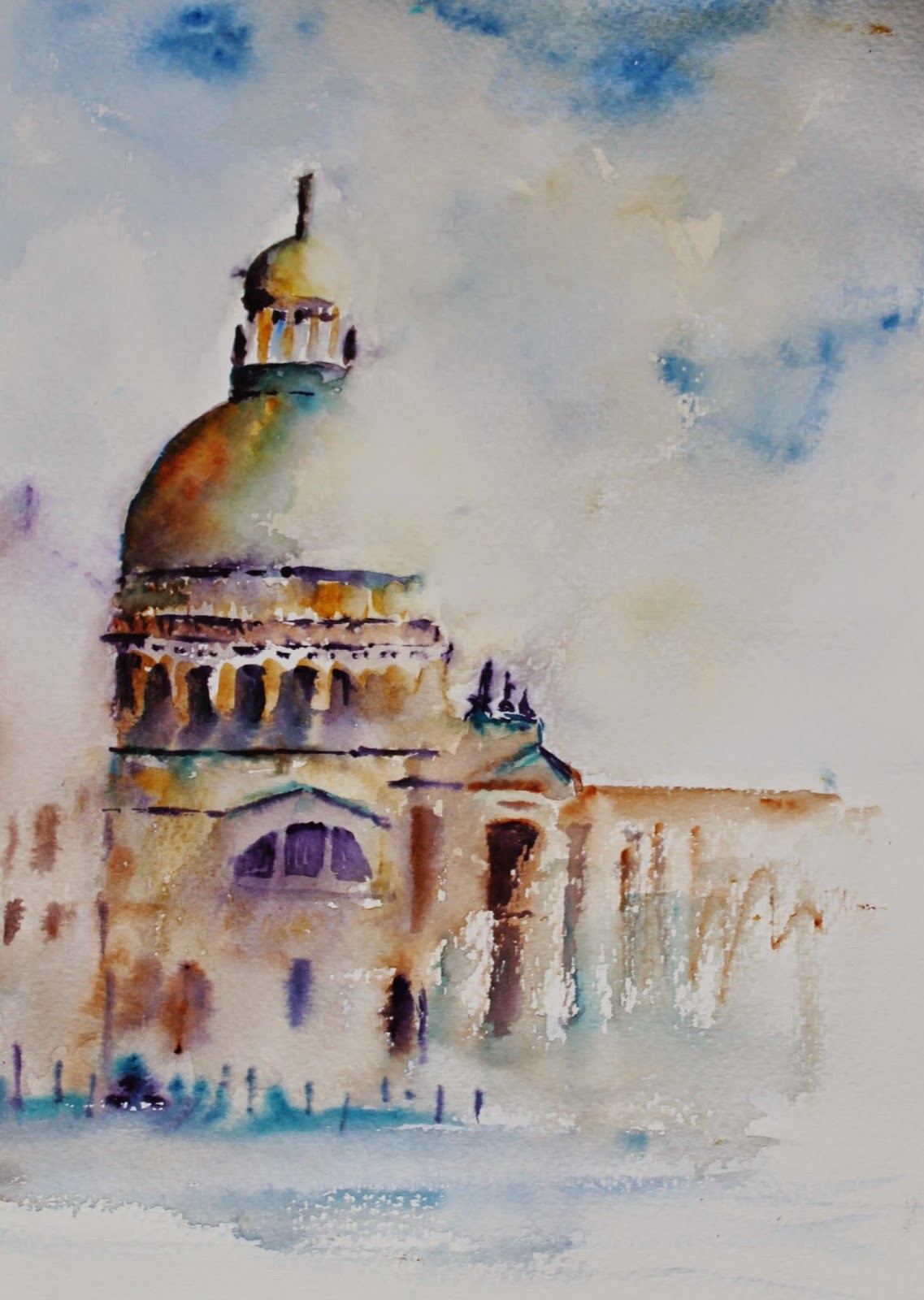 I think I might have tightened this a bit too much, possibly too dark on the shadow side of the building, have lost the feeling of light I had in the first and brought in too much of the building into the foreground rather than concentrating on the dome )and that really happened by accident as I started off painting the dome) and should have made it considerably bigger so that it became the focus. If I am being really picky I think the edge of the building directly under the dome needs losing, it looks too linear and regular and I may well do that or in fact paint another having got more information. I do like the colour and like the way it has translated into a sunny day and I like the little areas of detail in the building thought I thik thy may also be a touch dark.

You can see I have only used the image as a starting point, basically to get the shape of the dome and a bit of detail to add to it... the posts and gondolas have gone, the other buildings have gone, the whole atmosphere has changed and I have added my own slant on the colours. In this case it isn't because I think I can do a better job on composition, colour, light etc, simply that I had something I wanted to try and the image fitted the idea I had in my head.


I hope you can see from this that it isn't rocket science and it is something anyone can do given a little time and practice.Why not try converting your images to B&W as a starting point and see what you can come up with when you're not locked in to the colours you are seeing... very liberating!!! I work both ways from photos... like this where I have an idea of what I want to do and find an image that suits, or alternatively see something I want to paint and then maybe change the colours, the bg, the composition whatever I think will work both in a painting and for me as a painter.


Posted by Judith Farnworth Art at 03:05