I was a bit shell shocked to find on facebook I was being accused of copying Jean Haines work....in fact doing two direct copies of dogs from one of her books ( which I cannot find incidentally!) and passing them off as my own. If anyone is interested, these are the links to the paintings and my ramblings about them...... Holly and Boo.

I am very aware of this issue and as you will see in this post always try to give credit whenever I have used their ideas or if I have in fact used an image to copy from. I am not going to list links to all the posts in my blog but you will find paintings done from Jean's book, paintings done in Joanne Boon Thomas' workshops and also a blog where I state my views on copying from other artists in general...... so rest assured, it happens!!

I haven't heard anything from the person in question and don't suppose I will now but I am writing this blog as I was extremely offended and upset by the comment especially as those who follow me on here know that I work hard at my art and though I do follow and admire both Jean and Joanne's work and am influenced by them (there are many others too) I would never do a copy from them unless it was to learn something in particular and then I would more than likely post here and discuss what I've done. Apart from that I always produce my own work usually from images though my next aim is to work more from life and maybe do more plein air.

So although this was my idea for my next post I guess it also illustrates a point too!!

I was asked by one or two members of a group I visit to hold a small one day loose watercolour workshop for 6 of them where I could give more one on one tuition and they could really get to grips with some of the things I do in the bigger sessions at their group. They wanted to do some flowers and animals so I took some images, they took some of their own and armed with all sorts of examples and exercises I set off on Thursday to the session.

They were all experienced watercolourists, but as I hear all the time wanted to "loosen" up their style so we started off practising techniques of losing and softening edges doing roses and pinks. I try to keep hard edges to a minimum until I know I want one... they are much easier to add than get rid of so I don't commit too soon in a painting. You will see a step by step to some pinks in an earlier blog which demonstrates the sort of thing and I also did a blog about some roses back in 2012. So we practiced this for the morning, then moved on to animals for the afternoon session.

I have seen Jean do animals several times and the last demo in my previous blog blew me away and I thought I would have a go showing them how to paint an eye and move on to the rest of the features. I can draw fairly well and do a lot of work with no predrawing, but demonstrating this in front of a few people is a touch daunting! I have a lovely photo of a squirrel by Paul Sherman from Paint my Photo which I have used before and adapted to create an xmas card and as it has a good eye thought it would be suitable to try. I also had one of my little Grandpup Archie whose nose I demonstrated too!!

This is my effort 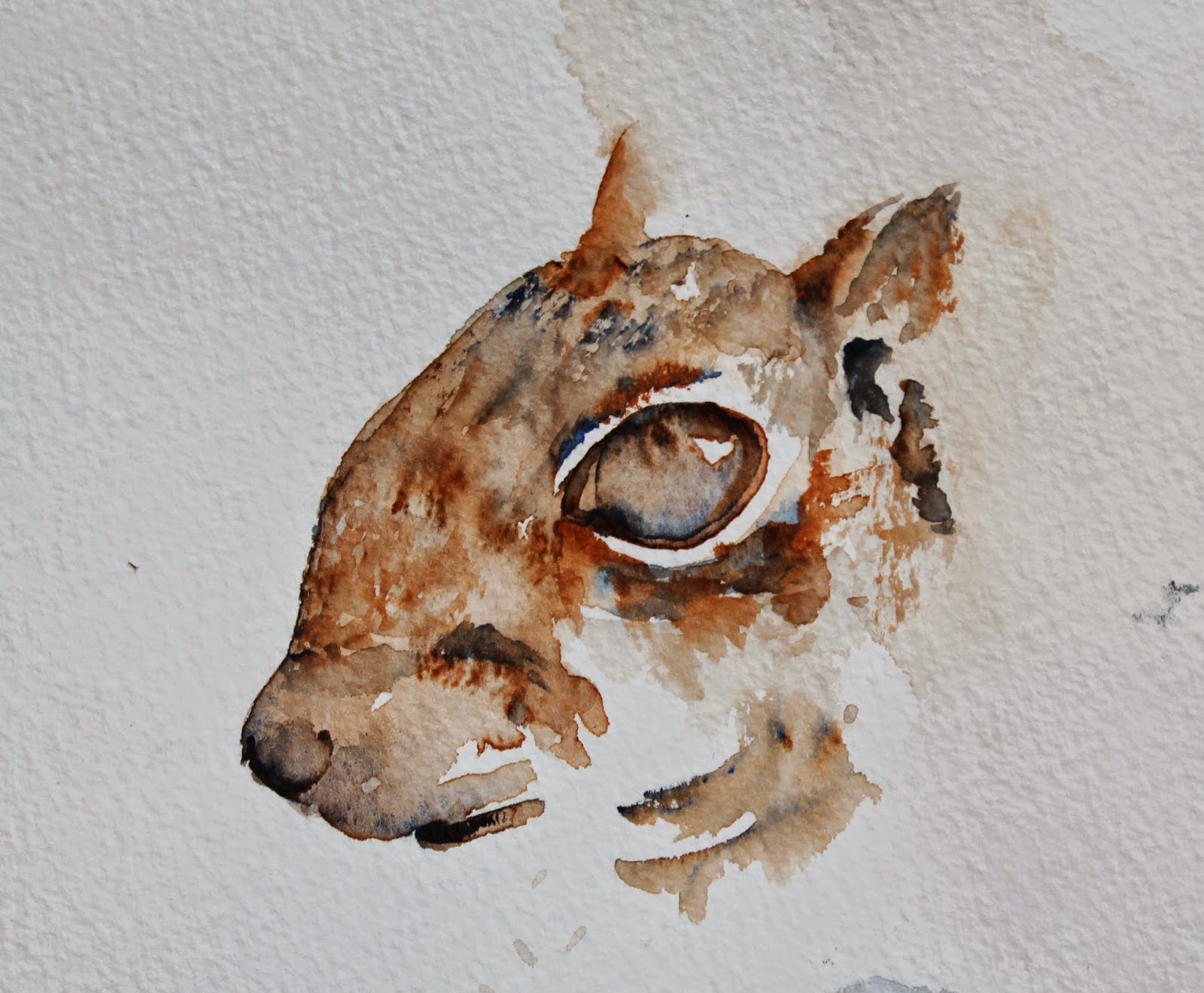 Not finished as you can see but as it is in on the corner of a piece of paper with all sorts of exercises and examples doubt it ever will be!! Eye looks a bit big but hey we were doing eyes so don't mind that!!

So, as I have taken this idea from Jean's workshop I would rightly mention that here, but what I would say is that this was done without reference to any of her work on the day, without having practised what she did and done from my brush and an image I had taken to the session so this is how I would paint it, yes with influences, ideas and some tips learned from Jean but nevertheless my brushstrokes, producing my work!! I also think Jean would be pleased to see me doing something like this as it is testimony to her skills as a teacher and just like Joanne, Jean has a mission to spread the love of watercolour to all those prepared to listen!!

Posted by Judith Farnworth Art at 01:56