I have been nagging him to let me practice on him for a few days now and he finally capitulated this afternoon!! As many of you will know I have some beginners workshops coming up and I have been doing some prep and I wanted to get some idea of how it was going and whether I was pitching it right.

So we started with some washes where I guided him through how to use the brush, how much water, the consistency of paint and of course a little mixing of the paint on the paper. He really seemed to take to it very well but was a bit unimpressed as he said he just did what I told him..... I do know from experience that in itself is definitely not a given and of course it was like one to one tuition and he painted along with me so that I could correct him before he made a mess.

After the washes, we did a bit of dry brush practice then drew a very simple mountain scene with a bit of water in the foreground. We built it up glazing layer after layer using UB, Alizarin Crimson, Burnt Sienna and Raw Sienna so that we could see some aerial perspective, the mountains getting darker as we came forward, and here is his finished piece!! 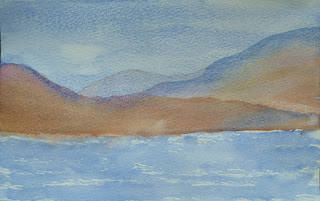 I think for a first attempt this is fantastic and only serves to reinforce my view that anyone can learn to paint... it is a skill not a talent and I am absolutely delighted that he has done this as a complete beginner and proved that someone who doesn't seem to have an artistic bone in his body can actually produce something as good as this!!

Posted by Judith Farnworth Art at 09:38