I saw this photo by David Webb on PMP and knew it was one I needed to paint!!

Otters are such lovely mammals, generally playful and sociable (though can be very territorial and aggressive) and populations have been gradually increasing thanks to environmental projects all over the country. Introduction of pesticides in the 50's resulted in a massive decline of populations until they were almost eradicated from the UK in the early 80's.... although it is difficult to accurately assess current numbers as they are secretive, nocturnal animals, populations are definitely on the increase and though they are a protected species, they are no longer endangered in the UK.

So back to the painting.... no drawing, that bit is getting easier, but I do think a bit more planning might help, as I just waded in with this one!! Not always the best idea as my brush often does it's own thing and places marks where I have no intentions of making them!!

and also used some white acrylic for the whiskers... that's another reason for planning a bit more... to reserve the whites and though I wouldn't normally try and reserve the whiskers, I would always tend to use a touch of white acrylic, generally reserving whites is tricky at the best of times, and when you are essentially drawing with the brush and the brush is as wayward as mine, you can get problems!! 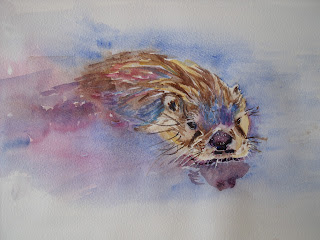 Posted by Judith Farnworth Art at 13:00