From the Sublime to the Ridiculous!!

I have had both these images stored for a while just waiting for the moment! Both are from photos on PMP, the swans one of Gary Jones,  a terrific wild life photographer and the Rhino by another super photographer, Nigel (ESP).

I did these two at the same time.... am sure many of you would think that was crazy that I might need to be in the zone especially with the two images being so different, one so serene and the other so imposing but I don't seem to struggle switching from one to another while I'm waiting for them to dry.

I really liked the peacefulness of the first one and the subdued colours (I know, bet you can't believe that!!) and it is such a change from my usual style and it was the light which drew me to the second image. I have been working on trying to achieve light for quite a while and am pleased with the effects I got with this.

Interestingly I have used the same limited palette for both these images...

I am quite fascinated by the very different paintings created using exactly the same colours, each has a completely different mood and feel, just goes to show how versatile watercolour is and of course I'm not biased!! 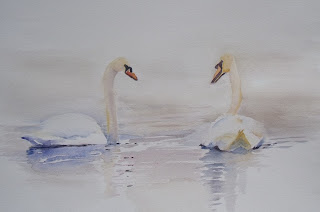 This was quite a quick painting to do and feel it needed less not more whereas I spent a lot more time on e Rhino where I used more layers and glazes while still trying to keep a loose feel. 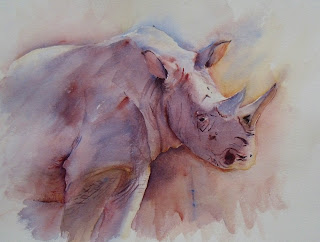 Posted by Judith Farnworth Art at 11:08