I teach this concept at every class I do and though it was something I grasped in the early days, I never grasped when best to use it so it was a tool at my disposal which I promptly forgot about. It wasn't until I really started to improve that I began to understand the significance of what an important technique this is.

Good painting is about having a variety of aspects so colour, tone, shape, line etc (and having repetition as well) and of course edge. Edges can be soft, lost, found, positive and negative.

Here is a definition I found from Craftsy

"Negative painting is a simple technique that involves applying pigment around an subject to give it definition. You'll add paint to surround the person, place or object, making it stand out because it appears lighter than the background"

which is pretty much what I would have said about it too. However you don't need to use the technique to make the whole subject appear.... you can just reveal part of it. I mentioned lost and found edges, well it is the found edges which can be created both positively and negatively... the lost edges simply aren't there.

In the leaf below at the base of the leaf you can see some hard edges formed negatively to reveal the edge of the leaf. Opposite another area of negative painting. The tips are mostly lost and there is a bit of a soft edge towards bottom right. Other areas have been painted positively where I have painted the body of the leaf and created the edge from inside. But the whole subject has a mix of all the edges and not all the subject has been defined. 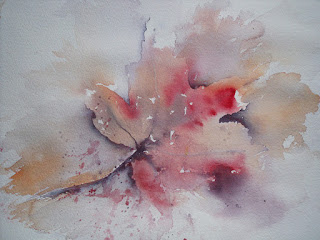 In the the following example the heads of the sheep have been created by painting the background behind them using a build up of quite dark paint. I have also left a little "halo" around the heads which also helps the idea of pitching light against dark while still allowing me to give some of the sheep dark heads and faces.The bodies have in contrast been "lost" into the foreground and the details on the faces have been painted positively. 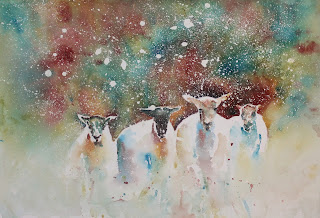 In this final example (a Brusho hydrangea) I have again used a variety of edges. Some of the form of the bottom of the flower head has been created negatively if you check out the stem it is clearly painted negatively as it is paler than the bg, and also some of the petals inside the flower. You can also see a little touch of yellow almost in the centre of the painting which just create a teeny bit of form and likewise if you follow the edge anticlockwise to just before "o'clock" you can see another tiny bit of yellow. Those touches just finish the shape physically and our eyes do the rest. If you look carefully at this painting you will see the full variety of edges though fewer positively created shapes than negatively, as hydrangeas tend to be lots of petals hidden behind others so lots of darker shapes 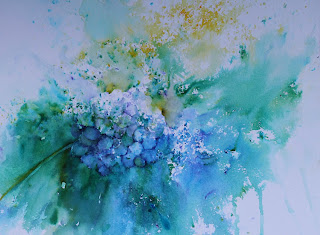 Would appreciate any comments to let me know if this has helped and if you would like another blog with some more examples... I didn't want to bombard everyone with too much information at once?
Posted by Judith Farnworth Art at 00:47