Sorrento, Amalfi, Capri with a bit of Plein Air thrown in!!

We have just returned home from a great trip to a small village called Massa Lubrense about 7km from Sorrento. We have visited Amalfi in the past, been to Umbria, Tuscany, Venice and Lake Garda and we have both come to the conclusion that we love Italy so decided to visit the area of Sorrento this year.

We arrived at our hotel to these views! 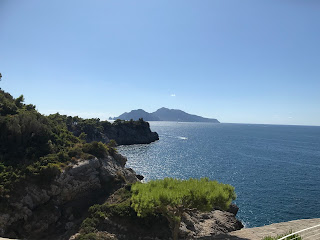 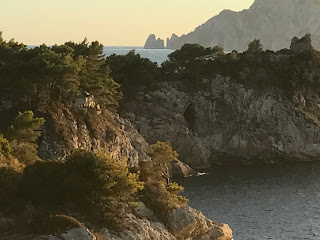 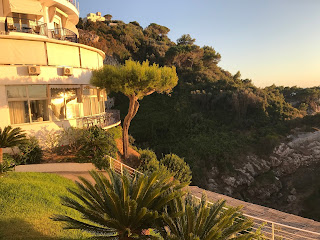 The hotel had a stunning location and this was meant to be one of the best views of Capri in the whole area which you can see here in the background and the island was on our list of places to visit. On our first morning I sat on our balcony and painted the glorious view of Capri. 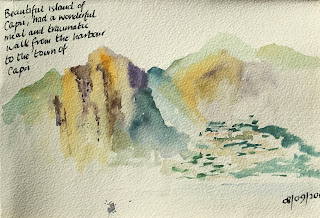 The weather was beautiful on our first day which we spent lazing around by the pool.

These were a couple of sketches done with  my elegant writer... what a fantastic pen, a must have for anyone wanting to sketch!! Also done with paper I have added to my Midori Travellers notebook...as an aside, a little book I had been lusting after for quite a while which  my son and partner bought me last xmas. It comes with it's own inserts but you can add your own paper and as I prefer to sketch with proper watercolour paper it's ideal for me to use. The only drawback is it is small and I really prefer  to sketch bigger but good to use with the pens.

Even though they hadn't had rain since May.... guess what happened our second day? Yep.. thunderstorms so we decided to go to Ravello a small town which sits on a hill above Amalfi.

Now Amalfi is only 25 miles away so when the tour rep said it would take about 2 hours I scoffed and thought..."what does she know?"So we set off on a courtesy bus from the hotel to Sorrento to catch the regular coach to Amalfi which takes the scenic route along the wonderful coast of the Bay of Salerno. We have seen the coastline from a boat and stopped at Amalfi which was why we decided to go straight to the village of Ravello with a plan to maybe stop off at Positano if we had time, on our way back to Sorrento.

Nearly 2 and a half hours later we finally arrived in Amalfi...the traffic was horrendous on the journey and of course the road is so narrow there are hardly any passing points so when you have a large coach things can get very tricky!!

We managed to catch the coach to Ravello and that journey, no more than 5 miles took another 45 minutes and we arrived at just after 1.00pm and as the bus back to Amalfi was just after 2.00pm a quick coffee and lunch was just about all we managed!! And forget the idea of stopping off at Positano on the way back as in order to catch the shuttle bus back to our hotel we needed to be back in Sorrento at shortly after 5.00pm!

The following day was forecast to be good so we thought it would be a plan to catch the ferry across to Capri...good weather wasn't forecast for the rest of our stay and the previous day some of the ferries had been cancelled so we wanted to  make sure we not only got there and got back as well!!

We had read about the funicular which takes you to the town of Capri from the harbour but being hardy Northerners decided to walk!! BIG mistake....over 20 minutes of either steps or steep pathways in the heat of the day did not make me a happy bunny. Even hubby who is extremely fit was puffing by the end!

Quenched by a couple of beers at the top we set off in search of a restaurant a friend had told us about which had fantastic views and luckily enough as we made our way down the other side of the island I spotted a sign for this beautiful place...Il Geranio. For those of you who have visited Capri it is on the side of the island which faces away from the mainland.

We had the most delicious meal and this was the spectacular view from our table..... I would certainly visit this place again if we were ever to go back to Capri 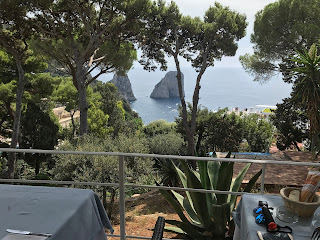 Saturday was a glorious day which we spent leisurely by the pool and Sunday we spent the day in Sorrento which though we had passed through several times had not stopped at. Though it is a very large town, the centre is really quite compact, quite commercial but some lovely little shops on pedestrianised cobbled streets. We had the obligatory pizza for lunch with the odd beer and the weather was surprisingly kind and didn't  drench us completely as it had the previous bad day.

Our final day did not look good from the minute we woke up....it was cold, blustery, thundering, lightening with torrential rain in fits and starts. We decided to stay in the hotel and that is where I finally did some more painting. I had done one or two sketches previously using the elegant writer but only one painting.

The hotel had an open air lounge with a roof but open sides where we sat with jumpers on keeping warm with the odd Cappuccino and this was my painting. Even though we had a roof we were braving the elements so I am calling this one en plein air!!! 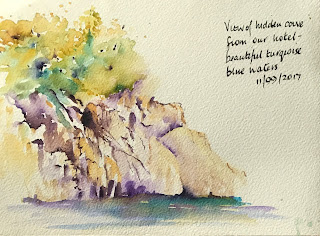 We got colder and colder and finally gave in and went in to the warmer lounge inside where all the other wussy guests were seated.

I got an ipad for my birthday in June and it was great to use for all my photos on this trip as I found it easier to carry around than my big camera and it was also very useful to use for my reference for the next painting which was an old dilapidated dwelling by the side of the road on the way to Amalfi. So I have to confess, this wasn't en plein air as even though the coach wasn't moving that fast, I couldn't manage a whole painting as we passed it either!! 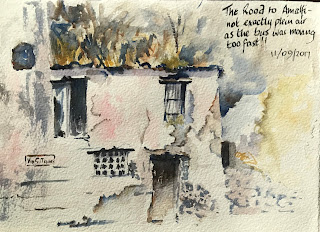 As I finished this painting one of the guests asked would I show them a bit about how I paint so as there was nothing else to do and I can't resist an audience I did a little painting lesson for 4 of them which everyone seemed to enjoy...just a pity I didn't have enough materials with me for them all to have a go.

So in true British style a post a bit obsessed by weather... in Malaysia in the same way as we in the Uk talk about the weather they talk about food and the restaurants they have visited.. after all the weather is so consistent and predictable there, there isn't much to discuss.

On a final note we were actually in Italy in June and the weather was also a bit freakish then....that time with a heatwave!! We had spent 3 days by the coast where it wasn't too hot but as we drove inland to the Chianti region of Tuscany there were temperatures pushing 40 degrees which is very unusual in June...never satisfied are we?!?!?!?


Posted by Judith Farnworth Art at 12:09