I have been to the lovely Westhoughton Art Group this morning or WAG as they are affectionately know and they wanted me to do a Brusho workshop so I happily obliged. Joanne Boon Thomas had taken a lovely photo of some poppy seed heads which I have used a couple of times and I also have one from Richard Long on PMP so I used them both for reference.

I asked them all to select their palette first as I find with Brusho it is very easy to get muddy colours and a little time spent before is time well worth spending as it is so easy to get the colour choices wrong. Just 3 and at most 4 colours.

I did a quick drawing....I don't often draw with watercolour but find it more important with Brusho so I have some idea as to where to sprinkle the crystals.

I used lemon, purple, leaf green and turquoise... it's a combination I use quite a lot... first because I like it, second because I know the colours work together and third I felt it would suit my subject.

One of the members of the group had been doing his homework and told me of another way to apply the Brusho which he had researched yesterday on the internet and I have to confess I have seen this done but not tried it so today was the opportunity to give it a go. It involves lifting the lids off which doesn't sit well with me, then, using a dry brush, scoop up some Brusho using your brush to sprinkle onto the paper,  I have to admit you could certainly position the Brusho better on the paper than sprinkling from little holes on the tops of the pots, my two hesitations are unless you replace the lids IMMEDIATELY you risk tipping the pots over and getting Brusho everywhere and unless you use a different brush for each application, you risk contaminating the different pots.....

My piece is still a WIP but I have to say I thought it worked well and I think I will go back to this one and just add a few finishing touches...... something I rarely do with workshop pieces. But this one has promise, it needs a bit more in the bg I think but I hope it will be a lovely painting when it is finished..... what do you think? 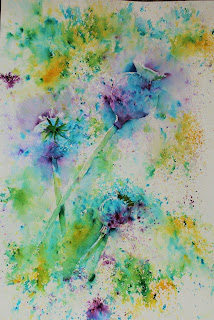 Posted by Judith Farnworth Art at 13:30