Well, what a night!!

I have taken over organising the demos and workshops for Horwich Art Society and had heard of this portrait painter from a lady who attends my classes. Things seem to be quite connected in the art world in the North of England with people attending several art groups and so news of someone who is really good tends to get passed around. Once I had booked him, I heard of him from several other groups too.

So who is the artist? He's Anthony Ogden and among other things he does live portrait demos in acrylic using a member of the audience in a 2 hour timescale. I had been told he captures something in his subjects so was really excited to see him work. One of the members volunteered to be the model and a fine job he did too!!

First was the sketch.....this was a joy to watch, he explained the general measurements of the human face, where the eyes are placed, the nose, ears and mouth etc and proceeded to build up a sketch of Tom's face. As he put the mouth in, the whole face just came to life and became Tom, it was quite remarkable how in one moment it seemed to be a generic face and the next, Tom appeared!

Anthony then described how he can approach a subject in two ways, one by doing a complete underpainting using washes and lifting out, or, as he did tonight blocking in the darks and shadows with a burnt umber using it more like a watercolour. He left areas white and built up the shadow as he could see them and then left the whole piece to dry before he started to add the colour.

He then built the painting up using a fairly limited palette of Burnt Sienna, Burnt Umber, UB, Cad Yellow, Naples Yellow and White. I do have one or two photos but I was honestly so engrossed in watching this master at work I simply forgot to take any early ones which to be honest could have been finished at that stage as lovely monochrome works. However we were all impatient to see how he built up the colour and he certainly didn't disappoint as although he only described the final piece as a sketch, I and quite a few others liked the spontaneity and freshness of the sketch every bit as much as his other more polished work...here are a few photos from the evening 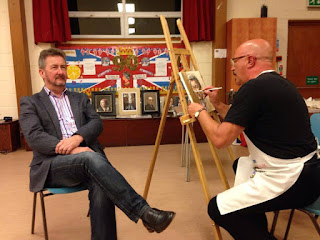 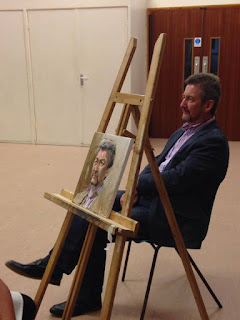 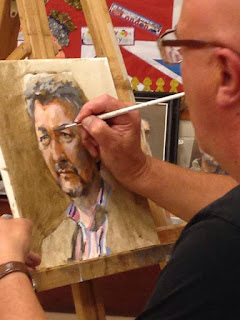 And here is the final piece 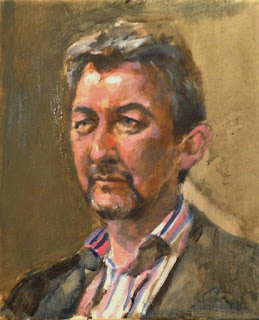 I think you can see how he captured the likeness very early doors and it all seemed so simple but as others had told me he also captured the essence of his subject and as he said "Not a photo in sight!!"

The whole session was a breath of fresh air thoroughly enjoyed by all attending, all marvelling at the great craftsmanship we witnessed tonight.....it was a revelation and even had me wondering about getting the old acrylics out and having another bash with them and for all of you who know me on here that is definitely a great compliment to Anthony as I never thought anyone could ever tempt me away from watercolour!!

You will see he is a truly "Fine Artist" and we are privileged to have seen him at work tonight!!

Tom's partner Liana liked the portrait so much she bought it and I was so pleased she did as it is a unique, wonderful piece of art and will now sit in its rightful place.....

Posted by Judith Farnworth Art at 15:05