We met David and Lisa on holiday 11 years ago and unlike many holiday friendships, this one has flourished over the years (despite the fact we are considerably older......we love having younger friends and thankfully they don't seem to mind having older ones!!). We met the following year when Lisa invited us to the Bar Mitzvah celebrations of her son to take place 10 years later!! They certainly like to have things organised!! As we are Christian we have never had the opportunity to attend a Bar Mitzvah so you can imagine our excitement at the prospect of attending such an event.

2 years ago we received a more formal invitation when the date was booked and we have been looking forward to it ever since.

We had to be at a Synagogue in Essex at around 9.15 on Saturday morning so travelled down the day before, dropping puppy Chester off with my sister in law on the way. I got a posh frock out and hat (for those who are unaware, the Jewish religion states woman must have their heads covered at Synagogue) and hubby collected a Kippah (a Jewish skull cap) which the Jewish men wear during prayer, study and eating (it is a custom rather than a commandment but a respectful gesture).

The men and woman sit separately at the Synagogue and the men also wear capes over their shoulders. Whether this particular synagogue was more relaxed than normal I'm not sure but the whole service though steeped in Hebrew singing from the Rabbi, male congregation and Bar Mitzvah boy there was also a relaxed atmosphere where people could come and go. I find the Jewish religion very interesting as it crosses and combines the boundaries of religion and ethnicity and by definition to be Jewish by birth, one has to born of Jewish mother (not father) though conversion is also possible and recognised.

A Bar Mitzvah is a huge event in the Jewish faith and signals a boy's transition to manhood whereupon he becomes respnsible for his own actions and his father is no longer punishable for his son's misdemeanours. He is also able to participate in Jewish prayers, can read from the Torah and can contribute to a Minyan which is a sort of religious quorum and requires 10 members of the community.

More recently in Jewish history, girls can also have their own ceremony a Bat Mitzvah which happens at the age of 12 and though does not involve quite the same religious content is nevertheless perceived in a similar way to the boys ceremony. Interestingly at this particular ceremony, Grandfather of the Bar Mitzvah boy celebrated a second Bar Mitzvah... only possible at the age of 83, 70 years after the first.

Having done a bit of reading around the subject I have also learned there is such a thing called a "Bark Mitzvah!!" Yes you heard it here... a doggy ceremony to celebrate the dog's coming of age either at 13 months or 13 years and many of these ceremonies have taken pace in the States!!

We stayed for two nights at the beautiful Sopwell House nr St Albans and on the Sunday had a lovely walk around the lake packed with birdlife and then on to the Cathedral. The huge Gala dinner took place at 5.00pm and started with a Pimms/Champagne reception with a Sushi Bar and the most delicious canapes I have ever tasted!!

The Bar Mitzvah celebrations began with some traditional Jewish dancing followed by the first of quite a few speeches during the evening. The band were brilliant and helped create a superb atmosphere. The highlight was a ventriloquist who had special dummies of Taylor and his sister. Mum and Dad had sent photos of them both to a puppet maker in Poland who had made caricature dummies of them..... amazing!! They had also recorded the children interacting during the previous 6 months which the ventriloquist incorporated into his act... very very funny!! This had to be the Bar Mitzvah to end all Bar Mitzvahs (not that we are experts, but we were told by many guests that it was the best that any of them had ever attended).

As I mentioned Taylor's Grandfather also took part in the ceremony and though it wasn't his actual birthday (the Bar mitzvah celebrates the boy's thirteeth birthday), I wanted to recognise the event for him too and decided to paint a portrait of his two children, David and his sister. The family had already commissioned me to paint a portrait of their parents earlier this year to mark their Diamond Wedding celebration so I thought it might be appropriate to complete their family collection. Here are both portraits 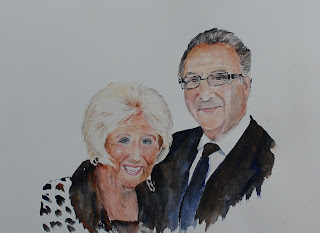 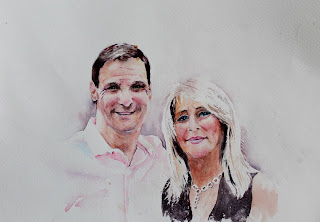 We truly had a wonderful time and feel honoured and privileged to have been asked to such a special event. The weekend will stay in our hearts as one of the most memorable times in our lives and our thanks go to David and Lisa for inviting us and for their warmth, love and generosity shown to us during the weekend.
Posted by Judith Farnworth Art at 13:11