My Exhibition and its' visitors

I made my first visit to the exhibition last Saturday... some friends had said they would like to come so  made their way over from Huddersfield early Sat morning for us to get to the centre at just after 11.00am. I was very surprised to see my sister there with her husband John Robinson... I hadn't known they were going to be there so that was a lovely surprise. I then started to have a look around the exhibition when I recognised someone in the corner, Mike and then bumped into his partner Carolyn whom I used to work with... she had seen the e-mail I had sent round to my contact list and decided to come up with her Mum for a look round. I know I had sent the information out to people but hadn't really expected anyone to come so am really grateful to everyone who has made the effort to visit!!

I would also like to thank Dave Hendry and Elise who left some delightful comments in the visitors book which told me they had been, am really grateful to you both!!

I had to unframe a painting for a customer who wanted to buy the painting but not the frame which didn't suit their decor so had just finished that when Sharon Whitley walked in. We had talked about the possibility of them stopping by on their way back from the lakes but even though I was expecting them it was still lovely to think they had actually made the effort to stop by. Sharon and I chatted non stop (well I think it was probably me who chatted non stop while Sharon and Gary patiently sat and listened!) and we set the art world both online and off to rights. Sharon and I have known each other for some considerable time now as she has been a member of a group I run on PMP for loose painting and it has been a pleasure to watch her progress into the special unassuming artist she has become!!

Gary also saved the day..........I realised after John had left, that I had forgotten my camera (what a surprise!!) so I prevailed upon Gary who as ever had his trusty camera in the car to take some pics of the work on display... I also asked him to take one of Sharon and me which I have to say is a fab photo as I am not known for being the most photogenic of beings and was very likely to have spoiled things... here are the photos Gary sent 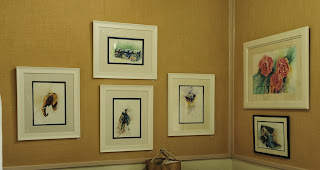 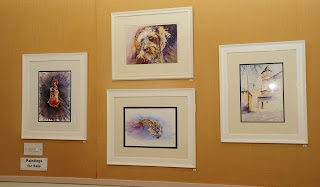 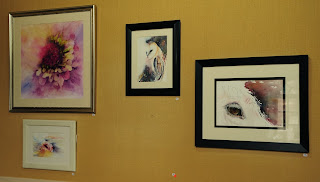 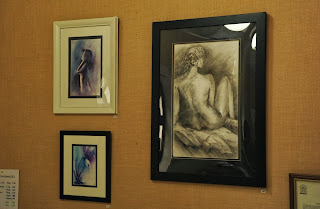 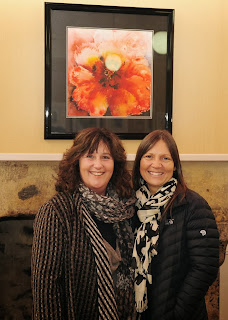 I am both delighted and impressed by the hanging of the exhibition.... the ladies work there voluntarily and it is usually one particular lady Melanie who does the hanging and I have to say she has done a fabulous job hanging work in a very complimentary and sympathetic way, something which, like framing, can make a big difference to an exhibition. So a big thank you to you Melanie for the hard work you put in!! Will be there again tomorrow replacing some of the cards which have sold.....

I also did a demo at Preston Art Society last Tuesday and have been along to a group called Grove Artists in Burscough today... don't know about them but I had a ball at both!! Am running the session at my own group on Thursday.. we're doing xmas cards, one of may favourite ones to teach, so very busy but in a good way and as always loving every minute!!
Posted by Judith Farnworth Art at 14:09