The second "proper" workshop (the first two were at my own group and where I cut my "teeth" so to speak!!!) I ever did was at Westhougton Art Group or WAG as it is affectionately known and since then I have been fortunate enough to have been asked back on many occasions and I am also invited to attend their sessions when they invite guest tutors... I know, am a very lucky girl!!!

Anyway this morning it was Joanne's (this is the link to her facebook page) turn to entertain the troops and I thought I would pop along, I haven't been to a Joanne workshop for a while so nice to get a "fix"....have been too busy with my own but a little rest-bite at the moment so heaven sent opportunity.

Now don't ask me why but I only took watercolour stuff and guess what she was doing... yes Brusho!!! So I begged, stole and borrowed (mostly from Joanne... thanks Jo!!) and got some equipment together so that I could join in.

With Brusho everyone produces different work which is one reason I love it and I know Joanne feels the same, as she likes to give the tools and skills to people so that they can continue to work independently. For this workshop, we had a very simple black and white predrawn reference image so not much drawing or detail, the idea being we would work to produce our own flower garden in front of cottage nestled amongst the trees.....I used some colours I hadn't tried before as Joanne has a bigger range of colours than me... interesting about the cobalt blue I chose for the sky as it was very turquoise and not at all what I was expecting. We used the medium in a variety of ways as Joanne wanted to show the group how versatile it is and how using it in different ways produces different effects.

Once again as I watched Joanne work I am reminded of how she is a master (or mistress???) of the finishing touch and how I am grateful for what she has taught me... lets face it there is no way I would be running Brusho workshops if it weren't for Joanne and the knowledge she has so generously shared both with me and her many other students.

As an aside I would never use the same images or subjects in my own sessions, that would be totally unethical (and also very lazy!!), what I do use are the tips,techniques and skills to incorporate into my own subjects and then deliver in my own way....my own work I find is less subtle than Joanne's,  as many of you know, me and subtle don't get on and I think that has something to do with the fact that particulary with watercolour, my technique relies more and more on picking paint up directly from the palette, mixing on my brush and creating the wash on my paper rather than in the palette.... I never know how rich the colour is going to be but all adds to the excitement!!

Anyway here is my painting, have to say I was quite pleased as I liked the colours.....made a mistake in adding the trees to the left... thought I had sprinkled  a yellow and as I sprayed it, realised it was red!!! But I actually liked it as it dried and felt it helped pull the painting together. 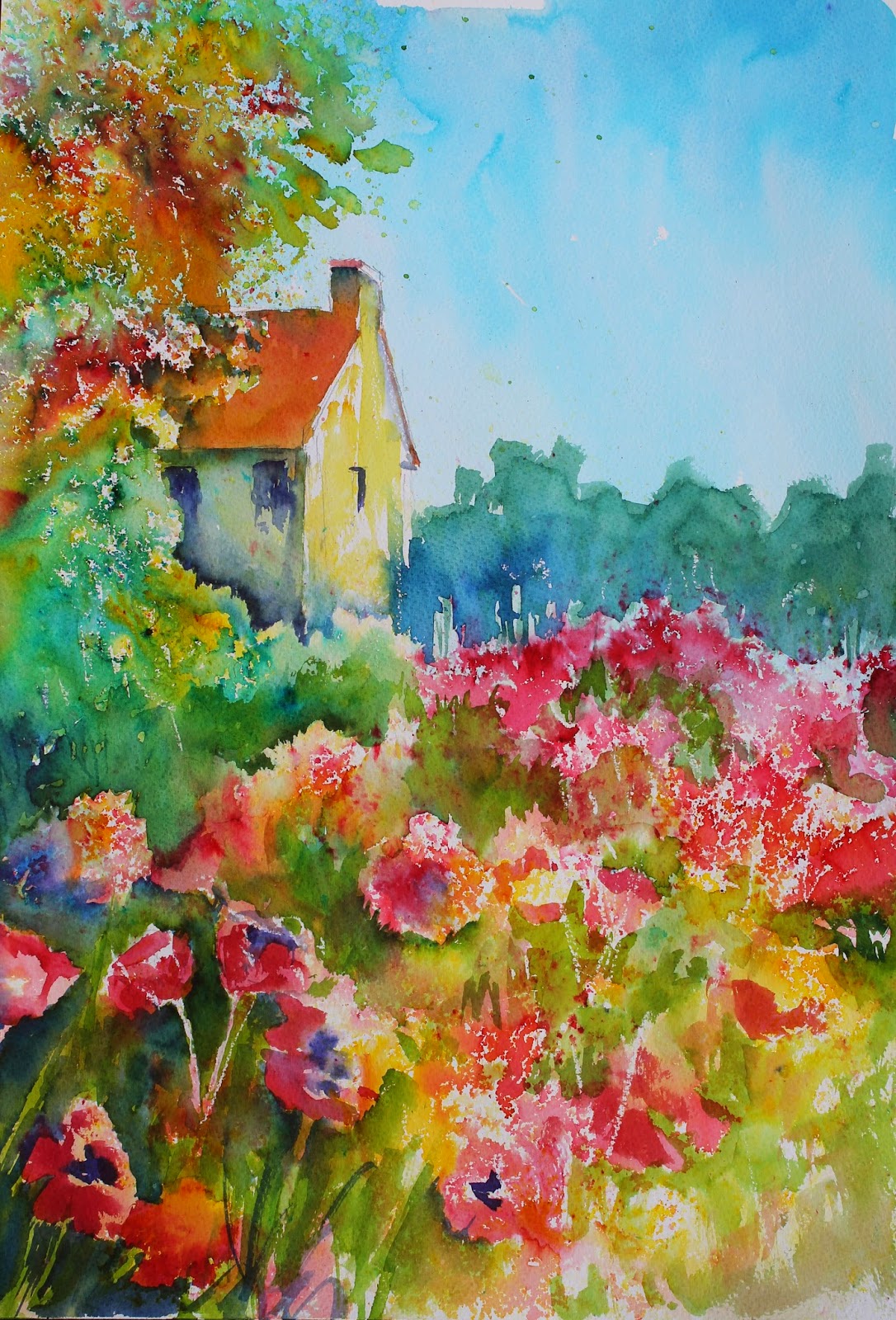 Posted by Judith Farnworth Art at 09:01