A Blast from the Past

Don't you think that's a great title? Sadly not mine but from Ann-Marie whose photo from PMP I have been battling with over the last few days. This was an image posted for the August image in the Loose group and I must admit after my very unsuccessful first attempt I was severely regretting my decision to use this image at all!! Here is the photo 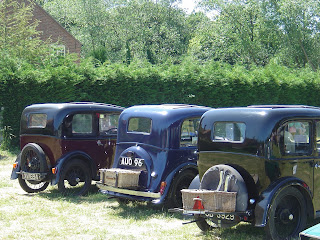 Anyway there have been some super paintings posted already and I was beginning to feel under some pressure so I decided to throw caution to the wind, bin my first effort on Arches no less and start again (Bockingford this time!!)... good decision!! I am actually quite pleased with this one and  I can feel another blog coming on where I may share all the efforts again from the group... they actually never cease to amaze me and there has been significant progress in the last few months.. the last few images though testing seem to have inspired and brought out the best in people... watch this space!!

Whoops looks like I have gone over my quota there!!

I worked wet in wet for a lot of this as I didn't want the colours on the cars to look flat and in my first try that's how they were looking. I normally work wet on dry but that is usually in a larger space where I can add lots of water and get those lovely watercolour effects but the painting areas on the cars was limited so I felt it needed a wet in wet approach.  I was also having trouble with the bg so decided to cut it out and leave well alone.... another good decision.

So here is my effort of this great image, tried to keep a loose feel but also wanted to capture the feel of the old cars so maybe could have "lost" a bit more and may even have another try to see where that takes me... 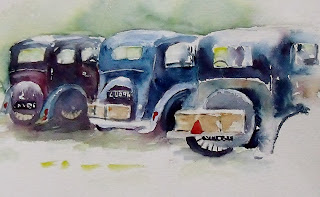 Posted by Judith Farnworth Art at 12:17