What a week it's been!!! My hubby was 60 on Saturday and for months now I have been planning a weekend away for the whole family without him knowing and that has been no mean feat!!! I booked B&B accommodation at

which if you remember from one of my previous blogs is the Guest House run by my son's girlfriends parents Dave and Sally Gregory. 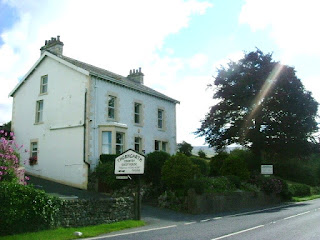 Here is my previous blog

I have told not only many fibs, but also white lies and even the odd proper "big" lie to try and keep the secret and as we are both now retired it has been very difficult......he is around all the time and asking where I'm going and what I'm doing!!!

As we booked B&B, I had made food for 17 of us for the evening which had to be prepared.... more fibs here...... I said I was going to exercise on Friday morning so left the house in my sports gear to finish off the food at my Dad's then had to wet my hair and slap my face to make it red so I looked all hot and sweaty when I came home!!! It then had to be transported to Ingleton, as well as balloons, banners, alcohol (of course) without him knowing with the added difficulty of how was I going to get him there in the first place?  Sally had the brainwave to invite him as a birthday treat for Friday night as there was obviously something going on for his birthday day so he actually cycled there.......nearly 60 miles at his age, I ask you!!!!

Anyway a little background on my 2 sons who are shall we say "fun loving" and mischievous to put it mildly. They are pranksters of the first order so hubby was a little concerned to say the least as to what his birthday treat might be, fretting from how he was going to cope with an aged, wrinkly stripogram to how he was going to conquer his severe fear of heights with the sky dive they had arranged!!!!

So to arrive in a local hostelry where, with the aid of sat nav, mobile phones and more little fibs the whole family had already landed with all the men wearing red wigs and glasses ( my hubby had red hair when he was younger) was not only the best surprise for him but an even bigger relief!!! Very fetching they looked too!!! Goodness knows what the other customers thought but who cares!!

Thank goodness even with a slip of the tongue from my Dad the day before and lots of underhanded quizzing from Birthday boy he had never got anywhere close to guessing the surprise and was quite overwhelmed with what went on..... RESULT!!!!

So big thank you to Dave and Sally who for their treat, hired a mini bus for the day to take us for a tour around the Yorkshire Dales and who also opened their home to our family with open arms. Their Guest House is absolutely spotless, in a wonderful location with the best breakfast and in particular the best bacon you will ever have tasted. I could go on but better that you check out their website

read their Trip advisor reviews and then maybe visit for yourselves.

Thanks also to my two sons who probably against their better judgement and certainly against type, behaved themselves impeccably and acted with restraint and consideration for their "ageing" Dad!!! He was suitably impressed!! Our whole family helped make this happen and I am truly grateful to them all as he is not easy to hoodwink and never ususally misses a thing.........he wasn't nicknamed "Jodrel Bank" at work for nothing..... so am feeling slightly smug at the moment and believe me, he won't live this down for quite a while!!!
Posted by Judith Farnworth Art at 12:54