I was both excited and disappointed about the workshop today, excited because I just love this product and was hoping Joanne would do figures (which she did!!) and disappointed because this was the last of the three and am not finished learning yet!!  Never mind, will have to get on with doing some experimenting myself as the list of all the techniques you can use with it seems endless as we have found out on these three sessions.

We started with a couple of warm ups where we went straight in with a pen, did a very quick drawing to keep things looking spontaneous and then in with just two colours to start with, followed by a third for darker areas. Here is my first go 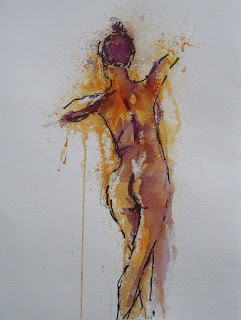 Staying vaguely within the lines and just a loose impression, this was not meant as a finished piece as Joanne wanted us to do 2 or 3 to get our brusho warm!! I would go in and darken more areas of this if I wanted it as a finished piece but as it is a practice will leave for now. 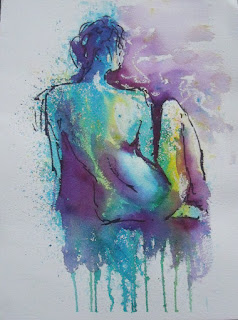 Drawing a bit dodgy on this but used colours similar to the cottage on the previous workshop just 'cos I like them and as it is the tone and shape which identify the subject not the colour... it still looks like a figure and I like the colour choices. I also worked on a third but didn't finish as I need to add more darks... may post that later.

And so we came to the finale.... the main piece we were working up to, this time a more subtle drawing.... a very sketchy pencil line to give a much gentler finish to the piece. The image I chose was actually the one Joanne demonstrated as I really liked the pose and I had done 3 of the others. We used only 2 colours on this, in my case orange and brown and I like the subtletly of this as opposed to the more direct method used on the first two 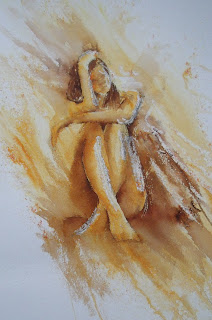 I might go in and gently touch the features a bit more but am going to "sleep" on it and see how it looks in the morning. Got to say am loving his one....

Am delighted with my efforts from the three sessions and what I have learned... have I told you how much I love this stuff??? But have to say I don't think I would have had a clue without the tuition.... it has made all the difference and the whole group produced some lovely work.....


Posted by Judith Farnworth Art at 07:57