The Trials and Tribulations of a new Palette!!

Though we weren't exactly snowed in yesterday, we decided it wasn't good to go out in the slippy weather with two crutches in tow so we had a lovely day hibernating!!

Apart from the obligatory soup and casserole making I decided it was a day of art, a day for finishing off and playing with new toys!!

I bought a new palette from Ken Bromley on Thursday and as many of you will know from previous posts I am not the most decisive person in the world and as the three radial palettes I currently use have 36 colours (I know, I know..... what on earth am I doing with so many colours, back to that later) and this palette only has 21 wells, have had to have a serious cull of colour... it was a sad day!!!

I love my radial palettes, the wells are so big when I add water to them I can get quite a dilute wash within the wells and as you know I do the rest of my mixing on the paper so rarely have to use the central area 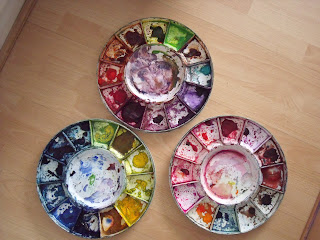 When I first got them I was doing a workshop on mixing greens so chose a selection of yellows and blues and filled one palette with those.... I then added the other more popular colours I use in the second palette and the final one I filled with my less used colours and any new ones I have bought since. 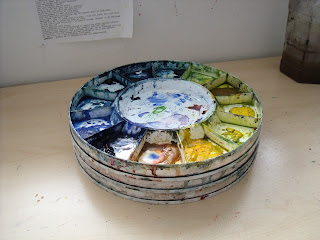 The Palettes stack and although they don't have a lid (should contact the manufacturers about that as it would improve the design if they did) they really suit me and I get on well with them!!


So what have I bought another palette for? Well although these stack and I like using them they are rather large and a bit cumbersome for me to cart about to all the groups I go to.... as I mentioned, a lid would help as I could stand them up and any wet paint wouldn't run all over the place but as they are I have to have a bag wide enough to fit them in laid flat.

I saw this new palette advertised at Ken Bromley's and happened to be speaking to Gill Fox who had just bought one and was very happy with it. The wells are quite large and when I saw it thought it would be much easier to carry about. As I do workshops both at my own group and others and I also go to Bolton Art Circle I thought I would try it out... phew!!! 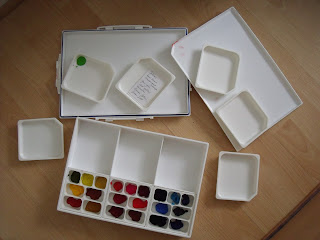 Here you can see it all white and virgin like... it has 21 wells and because the minimum colours I wanted were 22 I have had to use one of the 6 little trays for one more colour (think they might be pouring trays). For those who use mixing areas there are 2 large trays and the whole thing is very versatile. 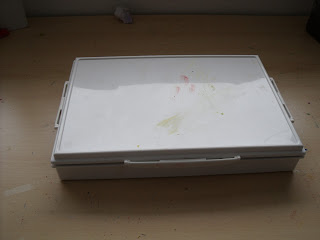 Here it is with the lid on... already splashed some paint on it.... am just so messy!!!

The number of colours I possess have been accrued over many years and am a sucker for buying anything anyone says is a nice colour!!! So my basic palette I think would be

I also have a few other blues and yellows which seem to be very close to the ones listed and one or two reds and oranges so in total a lot of colours. Having said that I rarely use more than 5 in any one painting but I do intend to start experimenting with some of the colours I don't use as often....... what seem to happen is we have a comfort zone of colours, we know what we like and what works for us, what to expect of those familiar friends and for me at least, I forget to try the different ones.. but no more!! I have already started on them, using them to create my colour planets and trying to get some different combinations... the painting of the rook used perylene maroon which I haven't use a lot of but felt I wanted to get to know it!! So that was my start!!

That was my lazy Friday then... it probably took me close on 2 hours to sort out my new palette..... deliberating, considering, wondering, deciding...... make no mistake these were big decisions to make in Judith's world and couldn't be taken lightly!!!  My husband thinks I was painting, he would think I was mental taking so much time to sort out a new palette, but we know some things just cannot be rushed and that was one of them!!


Posted by Judith Farnworth Art at 14:37